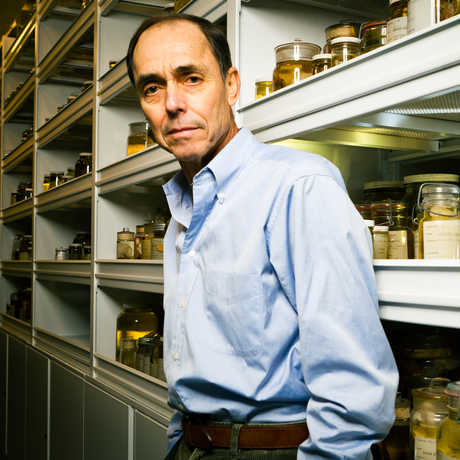 During my tenure as Director of Steinhart Aquarium, I was able to take advantage of the multiple water systems, the talented support staff, and the vast diversity of genetic material on display. It provided me with research opportunities ranging from studies of the symbiotic relationship of flashlight fishes and the bacteria which they house, to the husbandry of endangered winter-run Sacramento River chinook salmon (Oncorhynchus tshawytscha), to solving such practical problems as the cause of the submarine noise in Sausalito Harbor and the removal of eels from offshore petroleum structures. (See "The History of Research at the California Academy of Sciences' Steinhart Aquarium and Department of Aquatic Biology" by J. E. McCosker, 2007, Proceedings of the California Academy of Sciences, 58:171-195.)

Through studies of white shark (Carcharodon carcharias) behavior, my students and I have discovered the true significance of "publish or perish." Fortunately, the former, not the latter, has resulted in a book, a series of scientific publications, and public broadcast films (NOVA, BBC, National Geographic, and others) that have changed our understanding of white shark behavior and helped to formulate public safety policies for coastal waters and create legislation to protect that species. As a result, white shark behavior is now explainable and somewhat predictable, providing recreational users of the nearshore with lifesaving advice.

My studies of tropical snake eels and moray eels have added an important dimension to the understanding of bony fish evolution. These successful but poorly know groups have, through their evolution, become specialized through anatomical reduction rather than elaboration. Numerous new species, morphologies, and adaptations remain to be described.

The Academy has a century-long tradition of Galapagos studies. The insular endemism of the ichthyofauna is not unlike that of the terrestrial fauna. I have made numerous collections and studies using scuba as well as deepwater submersibles to 1000 meters depth. Through the analysis and description of the fishes and their habitats, I hope to contribute to the understanding of nearshore fish evolution and island biogeography, as well as to advise the government of Ecuador concerning its resource management.