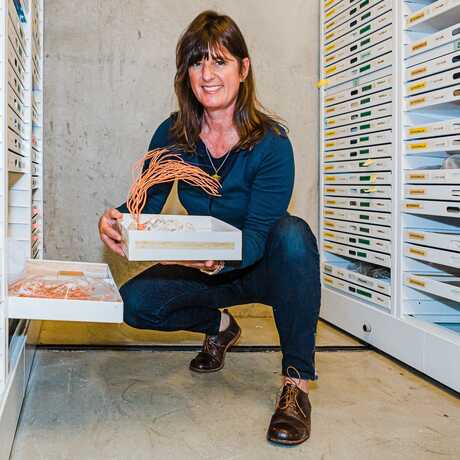 Chrissy specializes in polychaetes, a highly diverse class of segmented marine bristleworms comprised of more than 12,000 accepted species. These remarkably diverse animals exhibit highly variable morphologies and life histories and serve as integral components of nearly all marine habitats, in which they provide crucial ecosystem services as predators, prey, water filterers, reef-builders, and nutrient cyclers. With a primary focus on the particularly diverse marine scaleworms, she employs morphological and genetic data to study evolutionary relationships among populations of polychaete worms to better document faunal diversity. She participates in numerous research expeditions from local California waters to the central Pacific, Southeast Asia, Europe, Palau, and several expeditions in the Philippine Islands, an exceptionally rich region for coral reef invertebrate biodiversity.

Chrissy began her work at the California Academy of Sciences in 2000, when her interest in polychaete taxonomy was sparked during her work on an Academy benthic survey of San Francisco Bay fauna. Her efforts to document bristleworm and other invertebrate fauna in the Bay culminated in co-authorship of a field guide to SF Bay benthic marine animals. Current interests include general invertebrate taxonomy, cryptic marine species, and marine introductions. Recent survey work in the Indo Pacific has resulted in the description of several new polychaete species which inspired collaborative work to publish a comprehensive list of species described from this region. Her fieldwork aim is to build genetically useful specimen collections to facilitate the study of global faunal diversity.