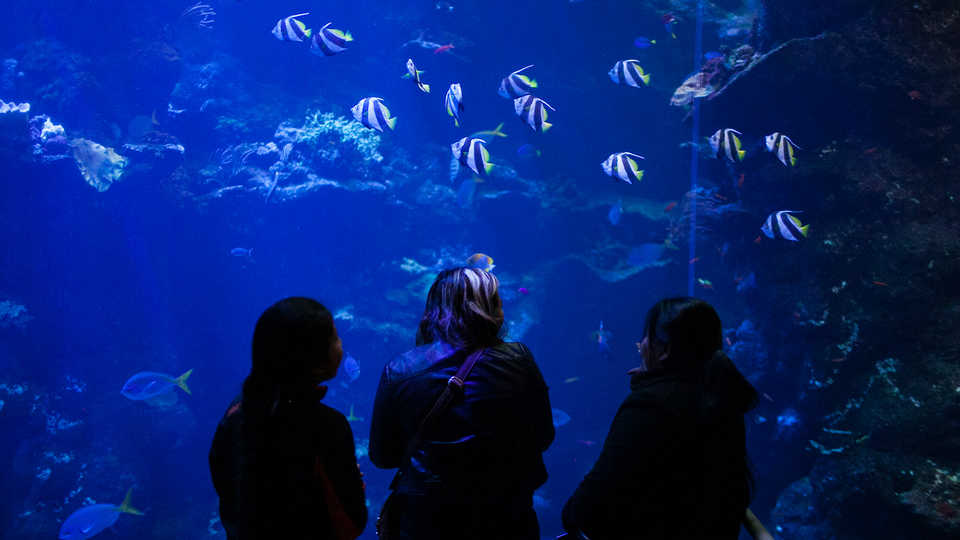 It can be hard for students to concentrate in a novel environment. Whether your class visits a minutely detailed diorama in Tusher African Hall or a mesmerizing tank in the Steinhart Aquarium, these tips will encourage students to engage all five of their senses as they observe and discover the wonders in front of them.

Allow for choice, help to focus: Because time is limited, don’t aim to see every element in the exhibit hall. Instead, let children guide themselves to a diorama or tank of their choice. This is where you play a key role – aim to keep them engaged for at least one full minute!

Ask rather than answer: Rather than lecturing to students or answering their questions directly, force them to engage their minds by throwing questions back at them. Don’t be afraid of silence; instead urge students to spend several seconds to think things over.

Don’t feel intimidated if you don’t know the answer yourself – the group should try to discover together!

Skim the labels for the kids: Students will not have time to read each label, and should instead focus on the display. However, you might consider skimming the text to give yourself ideas for questions to pose to the students, or fun facts to bring into the discussion.

Guiding Questions for any Exhibit

Encourage students to engage all five of their senses as you ask questions about the scene. General questions are provided, but don’t hesitate to compose your own!

Place yourself in the scene: Can you feel the sun? Does the breeze brush across your face, or bring with it any odors? Is it quiet, or noisy? Dry, or moist?

Shrink to the size of a bug: Where would you hide? How does the world look?

Unfreeze the scene: If a diorama came to life, what would the figures do next?

Eureka! A new species!: You’ve discovered a new plant or animal: What will you name it, and why? If you had to describe this species to a news reporter, what would you tell them about it?

What would happen if: That animal’s fur/skin/scales changed color? Lighting struck the dry brush? Our group was spotted by the wildlife? It were nighttime? Rain began to fall?

Non-living environment: What would be left if I removed all of the living things from this exhibit, including all of the plants and animals?

Focused Activities for any Exhibit

Going for a walk: Have a student describe the details of their surroundings to the group as they “walk” an imaginary path through the diorama. What do they see, feel, hear, and smell? The other students should use these clues to guess where the path ends. Nice activity for partners, as well.

Once upon a time: Compose a story about the exhibit as a group, with each student contributing one sentence (or several, if you have a small bunch). Narrate the first sentence or two. It may be helpful to pass along a physical object to indicate the next contributor.

Trace that shape: Direct student attention to a particular exhibit element. Have students lift their hand to eye-level, and trace the silhouette of the object on an invisible canvas. This promotes focus on form and line. Would they be able to draw the object from memory? Next, have students trace the object with their toes on a canvas at their feet! Can they trace the shape with their elbow?

Squat short, stretch tall: To support kinesthetic learning, involve the students physically when describing aspects of the display. When observing the forest floor, have students squat. If looking at the forest canopy, stretch those arms up high! Can you see far into the background, with your hands shading your eyes? Use gestures or poses to represent living things, and instruct students to mimic you, as you highlight key characteristics.

Periscope your view: In order to focus attention on an element :that might be overlooked, have students close one eye and form a tube in front of the other with their hands. Have them aim this viewfinder on the target object before beginning the discussion.

I spy with my little eye: A classic game that works best with busy, colorful displays. Stand before an exhibit, and make a statement such as “I spy with my little eye, something…. brown/ rough/ living/ wet /etc.” Let students guess the identity of the secret object. Or, have students work with a partner, challenging each other to find hidden details.

Stage the scene: In the open space in the center of Tusher African Hall, have large student groups (or the entire class) create a tableau with their bodies that models one of the dioramas. Several students can pose together to resemble an antelope, termite mound, mountain, or acacia bush. Don’t forget rocks and rivers! Have a student approach a museum guest: Can they guess which display the students have staged?

Mirror pose: In the open space in the center of the hall, have students stretch out both arms to create their own “zone.” Indicate an object in the display (plant, animal, landscape feature), and give students 5-10 seconds to think of how to shape their own body to resemble it. On the count of “1-2-3-Pose!” have students assume the pose immediately. Repeat with varied objects. 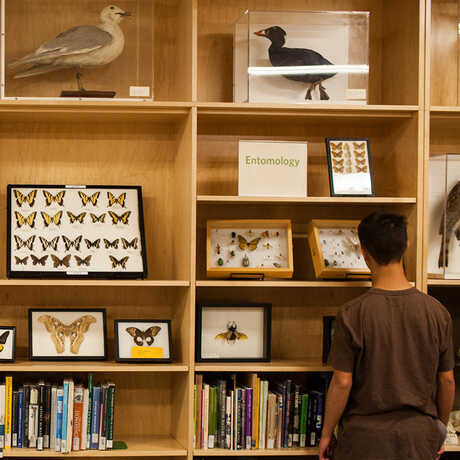 Helpful guides for planning your group's visit to the Academy.

Explore key concepts of Academy exhibits to help shape your students’ field trip experience, or to learn more about our scientific research.