A forest of sea fans 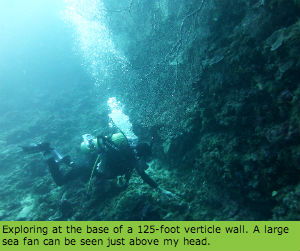 One of the goals of our NSF-funded Philippines research expedition was to explore an east-to-west gradient in the Verde Island Passage, an important waterway that separates the open Pacific Ocean from the South China Sea. Part of what makes this area so interesting from a zoogeographic perspective is that the passage has strong currents in some areas, and allows the exchange of ocean water between the open Pacific and East Asia.

Our primary job was to identify differences between the animal communities found in each coral reef region along that gradient; to determine how the species found there are distributed, and why. Along with colleagues from the Philippines and other institutions in the U.S. and Japan, we explored reefs in three areas: southwestern Luzon at Mabini, Calatagan to the west, and further to the southwest around Lubang Island, a place so remote that it was the site of the last Japanese soldier holdout from WWII, who hid in the rugged mountainous forests of Lubang for 30 years before being captured in the early 1970s.

During a series of dives, Bob Van Syoc (Senior Collection Manager of Invertebrates at the Academy) and I explored vertical walls at depths of 100 to 130 feet, finding a virtual forest of sea fans—a kind of large, fan-shaped, highly branched corals (also called gorgonians) that require substantial water currents that deliver food in the form of microscopic plankton. These corals are known as "micropredators"—that is, they use eight tiny, feather-shaped tentacles situated around the mouths of polyps to catch microscopic animals (zooplankton) and various plant-like algae (phytoplankton).

Zoogeographic and other findings will take a while to put together, but some of the more immediate results of the expedition—like these photos—can be enjoyed right now. 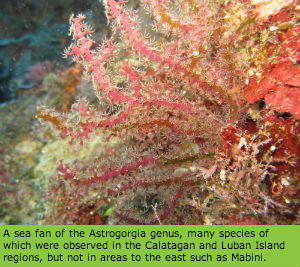