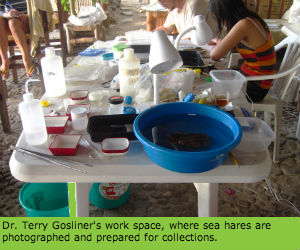 Anilao Pier, home to the notorious bobbit worm, is my favorite site in the Philippines for night diving. I first dove here in 2012, during my graduate studies at San Francisco State University and the California Academy of Sciences. The diversity of marine invertebrates here is astounding, especially with respect to sea slugs, snails, and anemones.

I'm particularly interested in sea hares, a group of sea slugs in the order Anapsidea. They're called sea hares thanks to the horn-like structures on their head, known as rhinophores, which allow them to sense their environment—and which happen to resemble rabbit ears. Like the nudibranchs they're related to (same phylum, different order), sea slugs have evolved potent chemical defenses to deter predation, since they're soft-bodied and possess either a reduced shell or no shell at all.

On one of my night dives during the expedition, I came across two beautiful, large, lime-green sea hares crawling through the sand and sea grass about 3 meters down. Overwhelmed with excitement upon spotting them, I actually squealed through my scuba regulator! I picked one up and let it go, watching it swim gracefully with its wing-like dorsal appendages (called parapodia), and later collected both for the Academy’s sea slug collection. 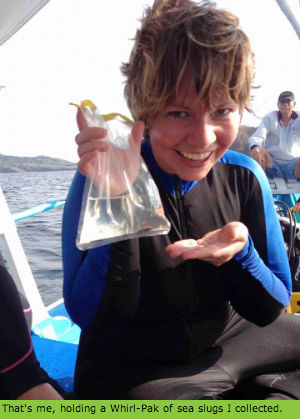 This was my first encounter with a species I later learned was Syphonota geographica, the only species within the genus Syphonota. Despite it being circumtropical (distributed throughout the tropics) and an invasive species in the Mediterranean, the Academy's Senior Curator of Invertebrate Zoology, Terry Gosliner, had only encountered this species once before in the Philippines.

I'm thinking about investigating its taxonomy and chemical composition for my PhD, since it may actually represent more than one species and contain variable chemical composition, depending on where it's found and what it eats. Syphonota geographica in the Indo-Pacific have been reported as feeding on brown algae, while those from the Mediterranean are considered specialists, feeding instead on the invasive seagrass Halophila stipulacea. Representatives from Greece have been studied chemically, but specimens from the Philippines haven't been researched—offering a great chance to add another chapter to our understanding of the area's biodiversity.

—Carissa Shipman, PhD student at University of the Philippines Diliman