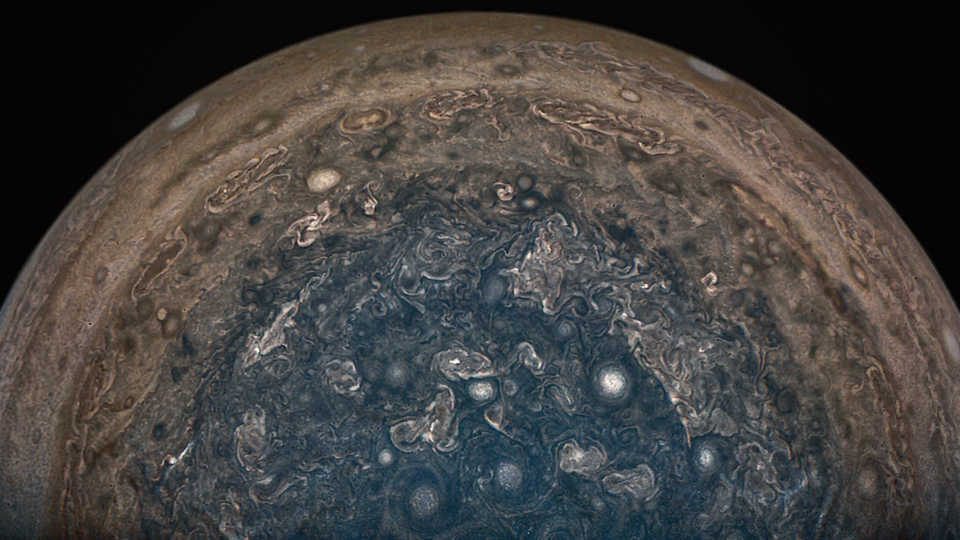 After its arrival at Jupiter on July 4, 2016, NASA’s Juno spacecraft is now on its sixth orbit, sending back high-resolution images that reveal dazzling details in the giant planet's cloudy atmosphere from as close as 4,100 kilometers, or 2,600 miles. (You can find more of the images here). To help visualize that, imagine Jupiter being about the size of a basketball. The close point in Juno's orbit would be only a third of an inch from the basketball's surface.

Juno started off in an elliptical 53-day orbit and was to eventually maneuver into a tighter 14-day orbit for the duration of the mission. However, after discovering sticky valves in the propulsion system, controllers decided to leave the spacecraft where it is and not risk trying to make a critical orbit-changing maneuver with unreliable valves. However, this doesn’t change the closest point that the vehicle comes to the planet (or perijove), so the quality of the observations won’t change—there just won’t be as many of them. The trade-off, however, is that the spacecraft will spend less time inside the planet’s powerful radiation belts and will thus have more time to study the planet’s outer magnetic field. This should help extend the life of the hardware, especially since early flybys show that the radiation belts are more powerful than first thought, with levels about 100 million times the exposure of a medical X-ray. Two of the instruments—including JunoCam, which has been sending back those mind-boggling visible-light images—are expected to survive only a few more orbits because of the damaging doses of radiation that they suffer each time Juno circles the planet.

Jupiter-philes can keep up with Juno on Facebook, Twitter, or the official mission webpage. You can even ride along on a realtime simulation that displays the spacecraft’s location in its orbit.

The Juno mission is currently budgeted through July 2018, at which point—depending on the health of the spacecraft—it may either be extended or de-orbited and sent plummeting to a fiery end-of-mission in the planet’s stormy atmosphere.