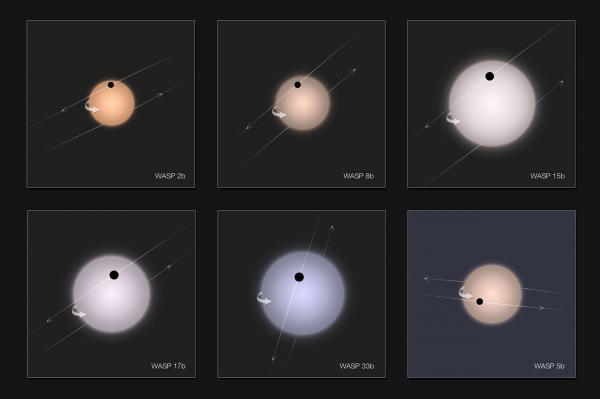 The more you learn, the less you know. The discovery of nine exoplanets has astronomers scratching their heads and seems to be turning what they know about planets upside-down.

Why? Well, when the new nine were combined with 18 other observations of transiting exoplanets, astronomers were surprised to find that six of them were found to be orbiting in the opposite direction to the rotation of their host star -- the exact reverse of what is seen in our own solar system.

"This is a real bomb we are dropping into the field of exoplanets," says Amaury Triaud, a PhD student at the Geneva Observatory. He was one of the leaders of the observational campaign who announced this finding today at the RAS National Astronomy Meeting in Scotland.

This is big news because planets are thought to form in the disc of gas and dust encircling a young star. This proto-planetary disc rotates in the same direction as the star itself, and up to now it was expected that planets that form from the disc would move along their orbits in the same direction as the star's rotation. This is the case for the planets in our Solar System.

Four of the six of these mixed-up planets are hot Jupiters—planets as massive as Jupiter, but orbit much closer to their star. One alternative theory to how these form suggests that maybe another more distant planetary or stellar companion has altered their orbits.

According to New Scientist after the first two retrograde hot Jupiters were discovered last summer:

Both planets may have been thrown into their bizarre orbits by a close encounter with another planet, or by the gradual gravitational pull of an unseen companion star. "The theories are all on the same theme: You need at least one other body in the system that does something to mess up the orbit," Joshua Winn of MIT says.

This close-encounter or pull would eliminate the possibility of a planet like our own in the vicinity, according to today’s announcement. "A dramatic side effect of this process is that it would wipe out any other smaller Earth-like planet in these systems," says Didier Queloz of Geneva Observatory.

With other ground-based observatories and satellites on the mission of finding exoplanets (454 have been discovered to date), what will we unlearn next?