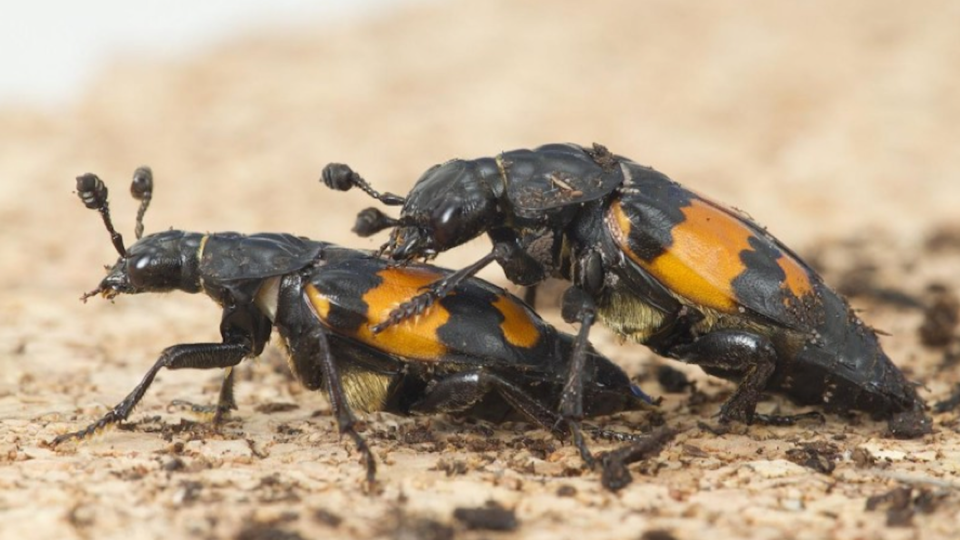 “… males that have more sex really are more insecure about their social status.” Sound like anyone you might know? Actually, this part of a quote from Nick Royle of the University of Exeter is talking about male burying beetles. Royle and his colleagues just published a study about these secure and insecure (and sometimes both!) beetles and their changing mating behaviors in the journal Evolution.

Burying beetles use a dead vertebrate carcass in their wooing and child-rearing. Sounds like a winning combination, right? They take the corpse of a dead rodent or bird, find a mate to share it with, bury it, and prep it (with antibacterial and antifungal properties) for their larvae when they hatch. (Here’s a great illustration of the process.)

The problem is there’s a lot of competition for dead carcasses in the burying beetle world. And a lot of competition for a mate with whom to share the carcass. When a male finds a dead body, it climbs atop and releases pheromones to attract a mate. Sadly, this can also alert other males. And it’s not the first who arrives, but the larger beetle that usually wins. So, in the case of male-burying beetles, size really does matter.

The scientists wanted to establish how flexible these behaviors were. Was the dominant, winning-the-carcass behavior genetically pre-determined (and rigid) or did environment affect dominance?

“Such flexibility of behavior in response to a change in social context is a common, but relatively poorly understood, feature of organisms,” says study lead author Mauricio Carter, also of the University of Exeter. “Plasticity of behavior is important because it allows organisms to respond rapidly to changes, increasing the persistence of populations in the face of environmental fluctuations. Our research increases our understanding of this important process that helps organisms adapt to changes in their environment.”