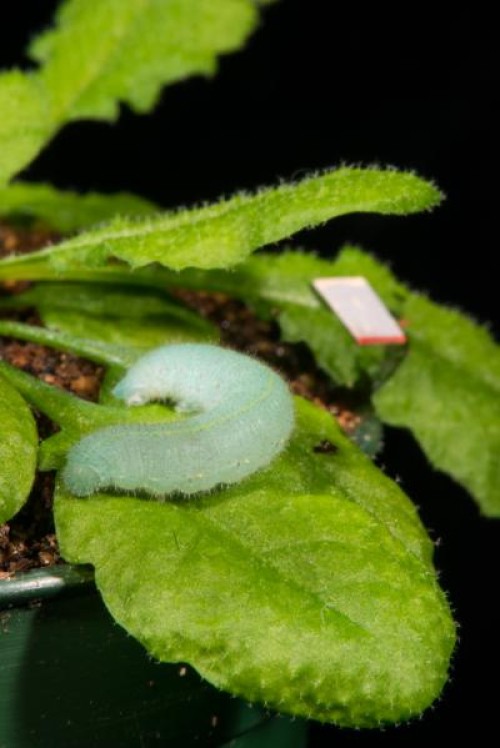 Plants are surprising organisms—without brains and central nervous systems, they are still able to sense the environment that surrounds them. Plants can perceive light, scent, touch, wind, even gravity, and are able to respond to sounds, too.

No, music will not help plants grow—even classical—but other audio cues can help plants survive and thrive in their habitats. But why? Scientists Heidi Appel and Rex Cocroft of the University of Missouri wondered whether plants would respond to the sound of insect herbivores feeding, so they ran a couple of experiments.

First they placed caterpillars on Arabidopsis, a small flowering plant related to cabbage and mustard. Using a laser and a tiny piece of reflective material on the leaf of the plant, they were able to measure the movement of the leaf in response to the chewing caterpillar.

For the second experiment, the team played a variety of recordings to different Arabidopsis plants, including wind and “mating song of a leafhopper, chosen because it has a similar frequency spectrum to that of chewing, but a contrasting temporal pattern,” according to their study, published last week in Oecologia. The plants did not react to these vibrations at all.

“Caterpillars react to this chemical defense by crawling away, so using vibrations to enhance plant defenses could be useful to agriculture,” Appel says. “This research also opens the window of plant behavior a little wider, showing that plants have many of the same responses to outside influences that animals do, even though the responses look different.”

So while it may not exactly be hearing, plants do sense sound vibrations. Next up for Appel and Cocroft?  More work to determine how plants sense these vibrations, what features of the complex vibrational signal are important, and how the mechanical vibrations interact with other forms of plant information to generate protective responses to pests. Stay tuned…