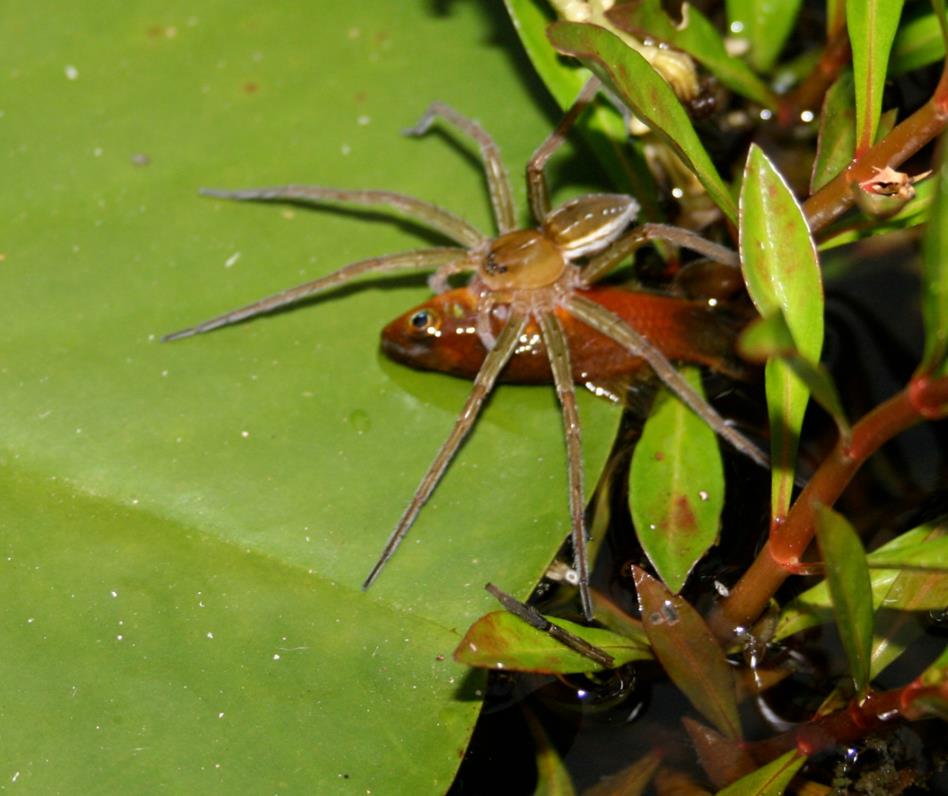 Sushi anyone?  In the wild you expect every predacious animal, from bears to bats, to shake an eager claw at this fishy offer. You might be surprised to find a certain eight-legged friend at the counter as well! Either way the fish get a raw deal; but in the case of predation by semi-aquatic spiders, it can also be a brutal one.

In their recent article for the scientific journal PLoS ONE, entomologist Martin Nyffeler and ichthyologist Bradley Pusey combine cross-disciplinary forces to shed light on a global phenomenon:fishing spiders! Surprisingly, the seafood-loving spiders occur on every continent except Antarctica, and are documented across five different families of Arachnid. Researchers can’t seem to place why fish have fallen prey to so many different spiders—twelve species having been described thus far—though there is some indication of occasional nutritional importance.

Perhaps more enticing than what seems like an uncommon dietary choice for a spider, are the hunting methods involved. No fishing poles here! One of the more dominant fishing spiders, Dolomedes, use the tiny hairs present all over their bodies to skate the surface tension of the water, snatching up prey in the process by mechanoreception. Others play the waiting game on the shore, letting prey come to them. As the fish approaches, the spider injects its victim with venom and drags it to a dry spot.

One perk of having their fishy prey on dry land (besides cutting its ability to fight back) is that it allows the spider’s neurotoxins to take full effect without dilution. The venomous injection liquifies the fish’s internal organs for easy consumption. If that’s not nightmare-ish enough, venomous spiders of varying size are able to haul in prey of 2.2 times their body size on average!

Want more? The genus Ancylometes is not only known for containing spiders that can dive under water for lengths of up to twenty minutes, but is also the only genus known to host two recorded species of fish-eating spider. Ancylometes rufus and Ancylometes bogotensis have been caught eating everything from frogs to lizards, but still need the safety of dry land to survive long term.

The only truly aquatic spider, Argyroneta aquatica, brings home the medal for most creative hunting technique: preying on frogs and fish from underwater, air-filled “diving bell”-shaped webs in which they live out their entire lives.

Dannie Holzer works in guest experience and as a production assistant at the California Academy of Sciences. In her spare time, she ’s a filmmaker.