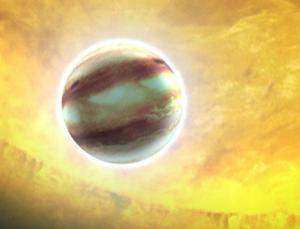 Perhaps our solar system is rarer than we thought.

As astronomers search for exoplanets, the bigger, more massive planets prove easier to spot.  One of the easiest type of planets to find are hot Jupiters, planets similar in size to Jupiter that maintain a very close and fast orbit around their parent stars—even closer than Mercury orbits around our Sun! (For comparison, Jupiter orbits the Sun more than 20 times farther away than Mercury.) These big, hot planets have enough mass to exert a noticeable gravitational pull on their hosts.

Typically, a hot Jupiter doesn’t have any companion planets—you might think of it as an only child compared to our family of eight planets orbiting the Sun. Astronomers theorize that many of these massive planets migrated from a large orbit to a smaller one. Their gravitational influence simply ejected other planets that got in their way. Even if a system started out with multiple planets, it might end up with only one.

Astronomers at the Fermilab Center for particle Astrophysics used data from NASA’s Kepler mission to look for transiting planets (we can see this in our own solar system on June 5th when Venus transits the Sun). The researchers analyzed 63 hot Jupiters, 31 warm Jupiters (which reside in slightly larger orbits around their parent stars), and 222 hot Neptunes (close to their parent stars, but not as hefty as hot Jupiters). The research team found no additional planets in any of the hot Jupiter systems, but on average, they found evidence for three possible companion planets around warm Jupiters, and two around hot Neptunes.

These results could imply that our home is unusual than other planetary systems. “The implications of these findings are that systems with Earth-like planets formed differently than systems with hot Jupiters,” says co-author Alan Boss. “Since we believe that hot Jupiters formed farther out, and then migrated inward toward their stars, the inward migration disrupted the formation of Earth-like planets. If our sun had a hot Jupiter, we would not be here.”

Alyssa Keimach is an astronomy and astrophysics student at the University of Michigan and volunteers for the Morrison Planetarium.