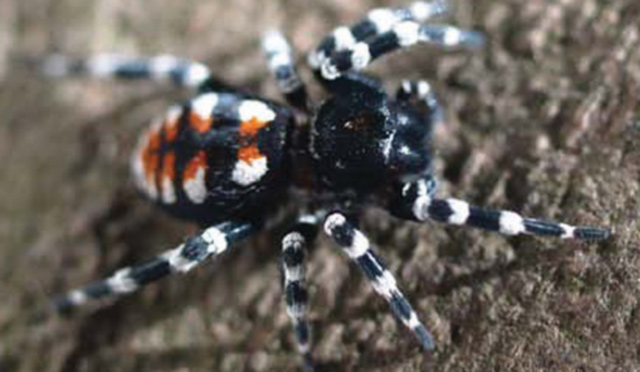 Loureedia Spiders
We lost an amazing musician this week when Lou Reed died of liver disease on Sunday. Not only will his music live on, but his name will too! Through a genus of velvet spiders.

“Velvet spiders are the common name of a family of smooth and shiny spiders,” explains Charles Griswold, the Academy’s Curator and Schlinger Chair of Arachnology. “These spiders aren’t bare, they have small hairs that give them a velvety texture.” The velvet reference reminded Griswold and his colleagues of the Velvet Underground, Reed’s band in the 1960s.  As big fans of the group, the scientists decided to name a misplaced genus of velvet spiders Loureedia after the rock star. It was published last year in ZooKeys.

“Jeremy Miller, an Academy postdoc at the time, sent the description to Lou Reed,” Griswold says. “We never heard back. But Lou Reed was aware there was a spider named in his honor.”

Ancient Gigantism
Sauropods (dinosaur species such as Brachiosaurus and Diplodocus) were the largest animals ever to live on land, exceeding all other land-dwelling vertebrates in both mean and maximal body size. While convergently evolving many features seen in large terrestrial mammals, such as upright, columnar limbs and barrel-shaped trunks.  Sauropods also evolved some unique features, such as the extremely long necks and the diminutive heads for which they are famous.

The unique gigantism of sauropod dinosaurs has long been recognized as an important problem in the evolution of vertebrates.  Raising questions as to why no other land-based lineage has ever reached this size, how these dinosaurs functioned as living animals, and how they were able to maintain stable populations over distinct geological periods.

Fungi Farms
Finally, how do fungi and bacteria interact in the soil? Well, according to Swiss researchers, in one case, the fungi actually farms the bacteria. According to the study’s abstract:

Farming by Morchella crassipes consists of bacterial dispersal, bacterial rearing with fungal exudates [fluids], as well as harvesting and translocation of bacterial carbon.

In other words, reports New Scientist,

… the fungus first cultivates the bacteria by feeding them, and then harvests them. The fungus may actually eat the bacteria, although it's not clear how.

Way to go, fungus! I just hope the fungi don’t get involved in the current fight over the Farm Bill.