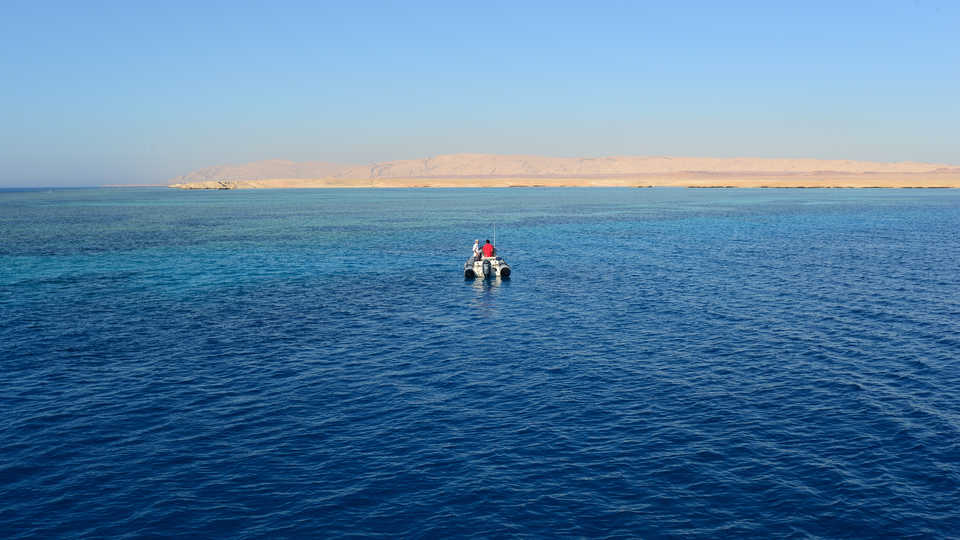 0
When Academy curators Terry Gosliner and Luiz Rocha traveled to Saudi Arabia this spring to study marine life in the Red Sea and the Gulf of Aden, the contrast awaiting them couldn’t have been starker. Beyond the enclosed campus of King Abdullah University of Science and Technology (KAUST), about an hour north of Jeddah, stretched a parched terrestrial landscape with daytime temperatures hovering near 105 degrees. But once the researchers boarded the 80-foot-long catamaran, they soon ventured into a rich underwater landscape teeming with life.

For the two-part, KAUST-sponsored expedition, Gosliner, Rocha, and a team of 15 international scientists spent two weeks documenting fish diversity in the Red Sea. On the second two-week portion, Rocha and five other researchers continued to explore tropical reefs within the Gulf of Aden, in the territorial waters offshore from Oman. The invitation to collaborate on this general, comprehensive survey arose from Rocha’s participation at a 2012 KAUST conference organized by Michael Berumen that produced a research paper coauthored by Rocha, Berumen,  Brian Bowen, an associate researcher at the University of Hawaii, Joseph DiBattista, a post-doctoral fellow at KAUST, and Michelle Gaither, a post-doctoral fellow at the Academy.

“The sand dunes and rugged mountains along the Saudi coastline reminded me of Baja, California,” says Gosliner. “And the Red Sea’s narrow body of water, caused by tectonic activity and fault lines, is not unlike the Sea of Cortez,” he adds. “That said, the Red Sea has unique features that make it very interesting from a scientific perspective.”

The Arabian Peninsula, wedged between Northeastern Africa and Asia, is bordered by oceans and seas on three sides. The Red Sea, along its western coastline, has a very small, shallow connection with the Indian Ocean. “Because of this geographic separation, it has a lot of unique species,” says Rocha. “There is a lot of endemism in the Red Sea.”

Coastal Oman, at the southeastern end of the peninsula, is open to the Indian Ocean. “It also has many unique species,” says Rocha, “but for a different reason.” The sea is more affected by upwelling that does not impact marine habitats in the rest of the Indian Ocean. Upwelling, caused by wind blowing from coast to ocean, pushes away warm waters on the ocean’s surface. Cold water rises from below to fill the gap.

“You won’t find coral reefs in these conditions—they can’t thrive in cold temperatures,” says Rocha. “Not only is this fauna unique, but the tropical reefs in the Western Indian Ocean are the least known in the world.”

The researchers brought back 350 specimens of nudibranchs and fish for morphological and genetic analysis. The new specimens fill a surprising gap in the Academy’s renowned fish collection.

“We have 250,000 jars of fish at the Academy, about 3 million specimens and 11,000 species,” says Rocha. “Almost everything we brought back is new to the collection. We had very few fish from Oman.”

Another surprise was Gosliner’s assessment of the leading environmental threat to sustaining the region’s biodiversity. “This is an active zone of human activity,” he explains. “To the north, it’s a major shipping corridor through the Suez Canal into the Mediterranean. In the south, you have the Somali pirates.”

And the source of the most severe harm to the ocean biome?

“Overfishing,” says Gosliner. “That has greater impact than all the other activities put together.”

Last but not least: How did the Red Sea get its unusual name? According to Gosliner, a leading theory is that periodic outbreaks of algal blooms caused by dinoflagellates temporarily changed the water’s color.

“When early explorers toured the area,” he says, “they may have seen that phenomenon we now call a ‘red tide.’ But the waters are a sparkling turquoise blue most of the time. So the Red Sea is truly a misnomer.”

Barbara Tannenbaum is a science writer working with the Academy's Digital Engagement Studio. Her work has appeared in the New York Times, San Francisco Magazine and many other publications.