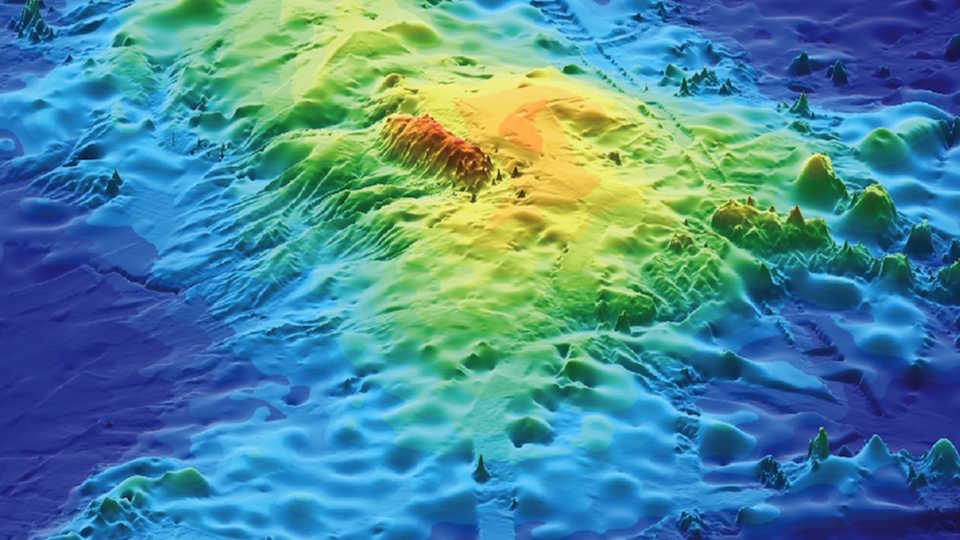 Only two years ago, scientists announced they had discovered the largest volcano on our planet, Tamu Massif. The giant had avoided detection for decades by hiding 6,500 feet (two kilometers) under the ocean surface in a remote area of the northwest Pacific Ocean, about 1,000 miles (1,600 kilometers) off the coast of Japan. Now Scientific American reports that researchers have begun studying its origin and growth from a ship operated by the Schmidt Ocean Institute in Palo Alto.

The beast began forming when lava flowed from the seafloor where three tectonic plates meet: the Pacific, the Farallon and the Izanagi. The researchers on the vessel took 1.7 million magnetic measurements to understand how this happened over time. The measurements show that more may be going on than just the activity at a “triple junction”: perhaps a mantle plume added to Tamu Massif’s massiveness. More analysis of the measurement data is to come.

A Small Win Against Chytrid

A paper last week in Biology Letters detailed the success of eliminating the deadly chytrid fungus (Batrachochytrium dendrobatidis, or Bd) from a population of wild midwife toads (Alytes muletensis) on the island of Mallorca in Spain. “This study represents a major breakthrough in the fight against this highly-destructive pathogen; for the first time we have managed to rid wild individuals of infection for a continued period,” says study co-author Trenton Garner, of the Zoological Society of London (ZSL).

It took several years, many attempts, and finally, a harsh remedy to do the trick, the team reports. Tadpoles were treated with an anti-fungal and ponds were drained and left to dry out, but as the ponds were refilled and the toads returned, the deadly fungus, which affects amphibians worldwide, also came back. The researchers tried again, this time spraying the dried ponds with Virkon S, a laboratory and agricultural disinfectant, before refilling. And success! Chytrid eradicated! There are concerns as to whether or not this type of treatment can be used in other locations for other threatened amphibians, but it’s a start toward winning the battle, amphibian biologist Karen Lips told Nature News.

As you take that bite of pumpkin pie (or another squash dish) this Thanksgiving, ponder this fruit’s (from the genus Cucurbita) great all-American past and tale of survival! A recent study in the Proceedings of the National of Academy of Sciences describes how these plants survived the extinction of large mammals on the American continents. While the fruit is toxic to smaller mammals, mammoths and mastodons were able to digest it and dispersed the seeds tens of thousands of years ago. (Evidence was found in 30,000 year old fossilized mastodon dung that contained squash seeds.) When they went extinct, humans likely took up the cause, the scientists report in the new study. And we’ve only improved them since! (For a great video on the history of the pumpkin, check this out!)