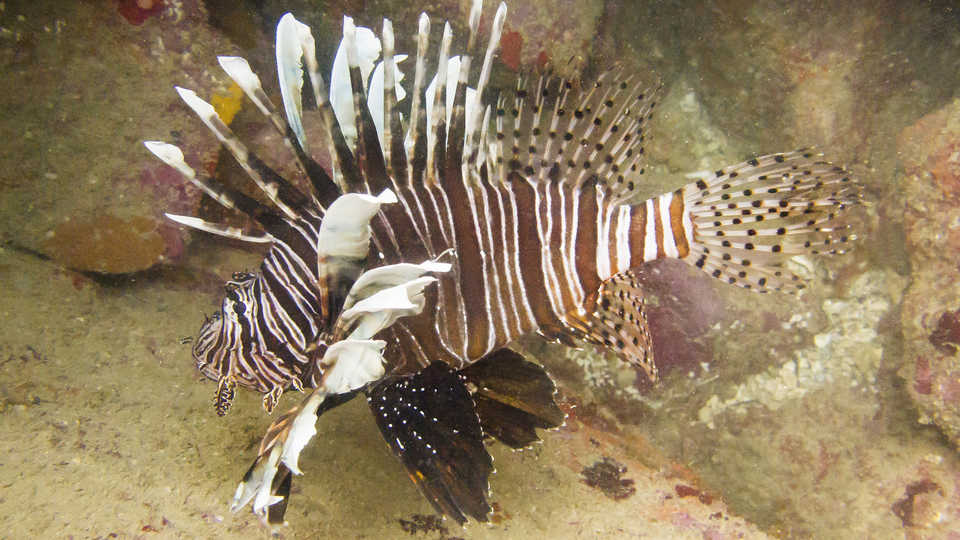 Two years ago, we created a video with Academy researcher Luiz Rocha about the lionfish invasion in the Caribbean. He worried then about the further spread of these predatory fish into his native Brazil. Recently, that concern came true when a single fish was caught with a hand spear off the Brazilian coast.

In May 2014, a group of recreational divers spotted an adult lionfish in the rocky reefs of southeastern Brazil. Rocha and his colleagues used genetic analysis to link the lionfish to the infamous Caribbean population of invaders. In light of a separate study detailing the lionfish penchant for eating critically endangered Caribbean reef fish, news of lionfish in Brazilian waters raises alarm for Atlantic reefs and the region’s already-threatened marine life. The discovery is published this week in PLOS ONE.

“For the past 20 years, invasive lionfishes have been restricted to the Caribbean,” says Rocha. “This new record shows us that lionfishes are capable of reaching far into other areas of the Atlantic, and other countries should be on guard, preparing for them to arrive.”

Lionfishes are prolific breeders made famous for threatening reef ecosystems outside their native Indo-Pacific distribution. Though the exact cause of their initial Atlantic invasion is unknown, experts believe aquarium dumping in the mid-1990’s is at least partly to blame. With flamboyant fins and vibrant, multi-colored stripes, P. volitans lionfish are popular additions to home aquariums, but they occasionally end up in nearby waterways.

Once free to breed in open waters, lionfish populations can explode in a short time. Some researchers estimate that one female lionfish can spawn more than two million eggs per year. The researchers say the P. volitans individual found in Brazil probably reached those waters via natural long-distance larval dispersal.

“Invasive lionfishes are a powerful enemy to native reef species—many of which are already threatened by habitat destruction and pollution,” says Rocha. “Without natural predators, lionfishes are ‘top dogs’ on the reef. They can easily pick off small, naive reef fish, and do so with gigantic appetite.”

Case studies from the lionfish-ridden Caribbean hint at what the future might hold for the southwestern Atlantic. Rocha, along with a team of scientists from the Academy and the Smithsonian Institution, recently zeroed in on Belize’s inner barrier reef to study the impact of invasive lionfish on vulnerable Caribbean coral reef ecosystems. The stomach contents of area lionfish—analyzed in the Academy’s Center for Comparative Genomics (CCG)—reveal just how quickly these invaders can devastate native reef populations.

Belize’s critically endagered social wrasse (Halichoeres socialis) made up nearly half of the lionfish diet at the inner barrier reef.

“We found 15 social wrasses in a single lionfish stomach,” adds Claudia Rocha, a molecular biologist at the Academy’s CCG and co-author of the study. “We expected to see several, but the actual number was surpring.”

The researchers concluded that many reef fishes share biological traits—including small size, schooling, and hovering behavior—that make them prime targets for invasive lionfishes. The combination of lionfish predation, limited range, and ongoing habitat destruction have contributed to the social wrasse becoming the most threatened coral reef fish in the world. Brazilian reef fish with small ranges and analogous traits face similar risks in the face of new lionfish invasions.

Compared to the Caribbean invasion, a lionfish population explosion in Brazilian waters may bring even more severe consequences. Brazilian reefs have relatively lower species diversity but a high number of fish found nowhere else on Earth, many of which have small ranges. The country lacks any formal monitoring programs aimed at early detection of invasive marine species, and is notorious for its struggles with fisheries management.

In December 2014, the Brazilian Minister of the Environment released new national “red lists” identifying 3,286 species of plants and animals threatened with extinction—83 of which are aquatic animals commercially exploited by fisheries. There are no bag or size limits for any species of fish, and commercial fishing interests continue to hamstring efforts to enact new fisheries management plans. As regional ocean health declines in the absence of regulations, fragile reef ecosystems are especially vulnerable to new threats.

“Brazilian fishes are being hit from all sides,” says Rocha. “Overfishing and habitat degradation are pervasive, and not even the most basic fisheries data are being collected. The best—and easiest—way to control an invasion is by trying to slow it down at the start.”

Rocha points out that recreational divers were the first to spot the P. volitans individual in Brazil, and alert local authorities. “It is important that Brazilian recreational divers keep their eyes out for lionfish and report sightings immediately.”

Brazil can take cues from lionfish control efforts in the Caribbean, especially since the P. volitans individual found in Brazil is genetically linked to those invasive populations. In addition to government-enforced marine conservation efforts, Rocha suggests empowering local communities to hunt and cook lionfish.

“Once you get past its poisonous spines, lionfish meat is delicious,” says Rocha. “It’s a delicate white fish that folks in Florida and the Caribbean are learning to safely prepare and sell.”

From lionfish derbies to “catch of the day” specials at local restaurants and supermarkets, coastal communties can help fight the lionfish invasions that devastate nearby marine environments. Lionfish can be the last straw for struggling reef ecosystems and critically endangered marine life, and every individual caught makes a difference.