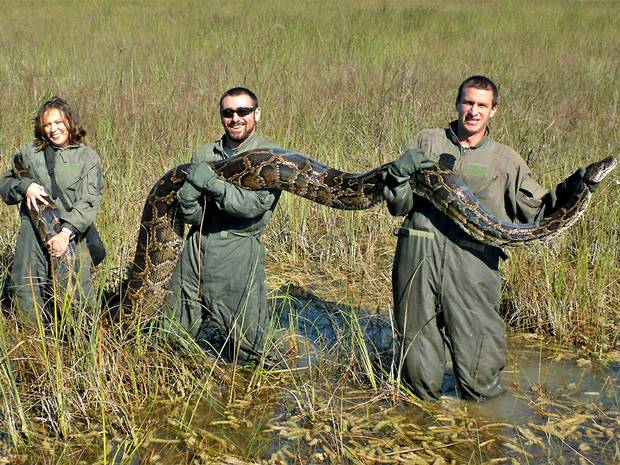 We were excited to learn that dung beetles use the Milky Way to navigate, and now there’s more excitement in the air! We may have discovered another wild species that can do the same.

The Burmese python, first introduced to the United States in 2000 via the exotic pet trade, has invaded 1,000 square kilometers of south Florida’s wetlands. These massive reptiles can grow up to 5.7 meters in length, making them a considerable threat to local mammals.

Reptile expert Shannon Pittman, a postdoctoral fellow at Davidson College in North Carolina, thinks that by researching how these snakes navigate, scientists may be able to control their spread and protect native wildlife at the same time.

“Biologists need to know how fast the snakes might spread and what corridors they are likely to use,” Pittman said, “so that conservationists can prevent population expansion.”

Pittman and colleagues implanted small radio transmitters into the bodies of twelve snakes, then translocated six of them away from their initial capture locations. After tracking the displaced snakes for ten months it was clear that their movements were carefully calculated: five of the six slithered home! The paper was published last week in Biology Letters.

“Most snakes have a home range and like to stay in that area,” said Pittman. “When they are moved to a new location, they tend to wander and try to figure out where they are.”

This finding parallels research showing that successful predators are also successful navigators. The next task is to figure out how they do it.

Alyssa Keimach is an astronomy and astrophysics student at the University of Michigan and interns for Morrison Planetarium.