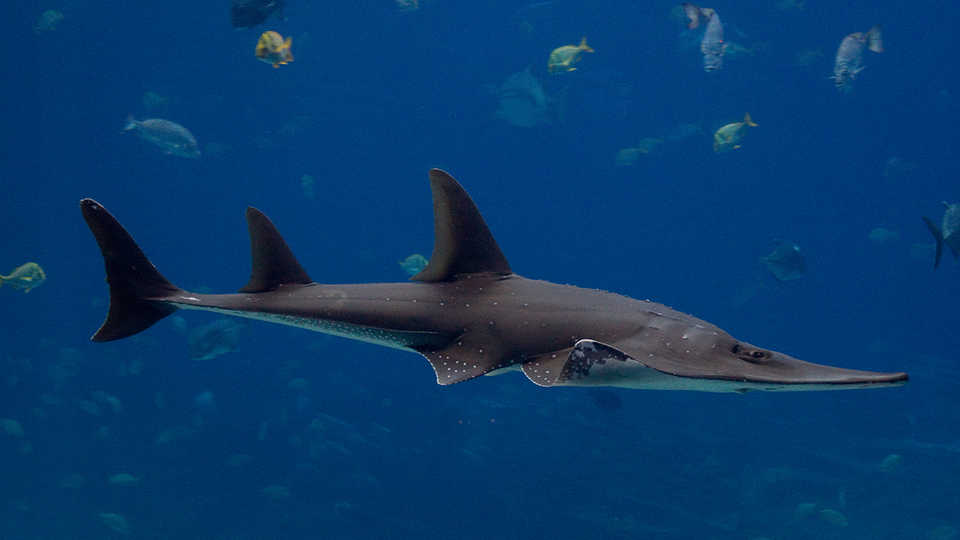 In observance of Shark Week, we are rerunning some of our favorite articles on sharks and their conservation. Sharks are an integral part of marine ecosystems, and important conservation efforts continue to make progress worldwide.

How can you protect something if you don’t even know it exists? That’s the predicament for Dave Ebert, from Moss Landing Marine Laboratories. The Academy research associate is a shark specialist for the IUCN (International Union for Conservation of Nature), the organization responsible for the Red List, assessing the conservation status (from Least Concern to Extinct) for many of the species on this planet.

“Sharks,” you’re thinking, “that’s not a problem, everyone knows sharks exist. They even have their own week on the Discovery Channel.” Well, we hear a lot about the great white and whale sharks, but there are more than 500 species of sharks. If you add their relatives, skates and rays, it’s more like 1,200 species! And only a very small percentage of those get attention, conservation efforts, or even just studied, period. Ebert wants to change that. He wants people to know about these “Lost Sharks.”

The honeycomb catshark is a perfect example of these so-called “lost” sharks. “It is a species that occurs on the east coast of Africa,” Ebert says. “And it hasn’t been seen since 1972. It didn’t even get formally named until 2006.” Does it still exist? Has it gone extinct? “Who’s going to follow up on this? Is it still here? And if so, where?” he asks. While scientists study whale sharks and great whites and manta rays, who is studying or even looking for the honeycomb cat shark?

In November, Ebert was conducting a workshop on shark identification in the Seychelles when local fishermen brought in a fish they called a “violin shark.” “What the heck?” Ebert said; he had never heard of a violin shark. “It turns out it was a whitespotted wedge fish,” he explains, “a type of ray highly sought after for its fins. It’s common off Australia and Southeast Asia, but we didn’t know it occurred in the Western Indian Ocean. The fishermen said it was common locally, and that they grow to seven or eight feet in length. However, this was the first known record (to science) of this species from this area; extending its known range by several thousand miles. It really emphasizes how little we know about many of these sharks and rays.”

“A colleague recently observed a little shark swimming about seven kilometers up a freshwater river in Sri Lanka,” Ebert continues. “It looks like it may be a Pondicherry shark, a species no one has seen for at least 40 years, and most records of are from over 115 years ago! And it’s never been observed from a river!”

Ebert’s graduate student Paul Clerkin encountered a skate in his recent travels to a seamount in the southern Indian Ocean. Although it isn’t a new species, it might as well be. It is only the second specimen found of the particular species and it was found “in the middle of nowhere—halfway between South Africa and Perth, Australia,” Ebert says. It is called the Broken Ridge Skate in reference to the Seamount Chain it was discovered on. Seamounts are unique habitats, often with endemic fauna—species found there and nowhere else. “Understanding these sharks can help us learn about their ecology and how the species interact with the whole ecosystem down there.” Another skate, this one a new species from Ecuador, Costa Rica, and Panama, is currently being described by Ebert, another graduate student of his, and Douglas Long (another Academy research associate). Interestingly, this new Central American species is closely related to the southern Indian Ocean species found half a world away!

Cookiecutter sharks are very common in the tropics, which seems like the furthest thing from “lost.” Almost 30 years ago, the Academy’s John McCosker and his colleagues suggested that these sharks may be found in California waters. The cookiecutter’s bite leaves a distinct little plug in its victims, and elephant seals and sea lions off our coast had these marks, providing circumstantial evidence for these predators in our waters. Sure enough in January, fisheries observers discovered one of these sharks off of Morro Bay for the very first time. “A lost shark found off of California,” Ebert says, shaking his head. If we don’t even know the diversity of sharks in our own backyard, you can begin to understand what a huge undertaking this is, to understand what lives where.

And these are only a small number of the lost sharks out there. Ebert is trying to find more but he’s only one scientist. He’s training graduate students to help his endeavor and trying to bring general awareness to this issue along the way, including a stint on a BBC three-part special on sharks to air this summer. “I also need funds to go and look for these things,” he explains.

And the work is incredibly important. “It’s hard to make conservation policy if you don’t know what you have and where it occurs. We need to find these species, put names to them, and learn about their ecology and life history.”