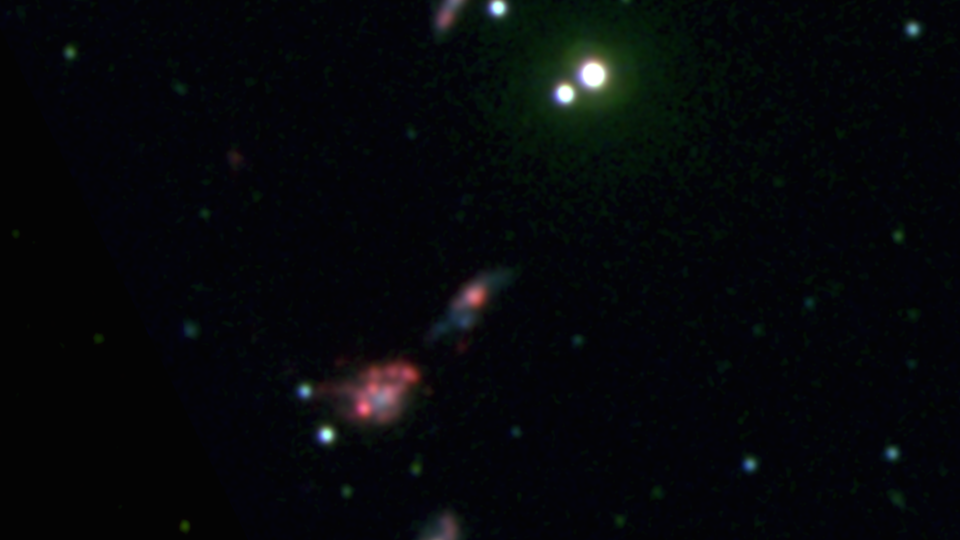 We live in a gorgeous spiral galaxy (kinda like this one or maybe this one), home to hundreds of billions of stars. And although there are bigger galaxies out there, ours is pretty good sized. But how did our Milky Way Galaxy get that way—substantial and spiral-armed?

It seems that big galaxies (like ours) grow out of collisions and mergers of much smaller galaxies—so called dwarf galaxies, each with only a hundredth or even a thousandth the mass of the Milky Way. (Astronomers call this “hierarchical assembly.”) We find plenty of circumstantial evidence to support this idea, but until now, we haven’t seen the wee galaxies caught in the act. In an articled published today in Nature Astronomy, Sabrina Stierwalt and her colleagues report the discovery of seven groups of dwarf galaxies, suspiciously spotted hanging out together.

(To be clear, we see plenty of dwarf galaxies, all over the place! But most of them loiter around much bigger companions; the Milky Way has dozens of such satellite galaxies, for example. But the new research reveals dwarf galaxies on their own, unsupervised.)

The astronomers began with the Sloan Digital Sky Survey, the largest census of galaxies ever undertaken, and then followed up with observations using giant telescopes in Earth’s northern and southern hemispheres. As part of the TiNy Titans research program, the researchers measured distances to the dwarf galaxies to confirm that, indeed, they didn’t just seem to appear in the same part of the sky (it can be hard to judge a dwarf galaxy’s distance based on its appearance) but actually resided in the same part of space.

And their work didn’t stop with observations. They also used computers to simulate how galaxies form (growing through the aforementioned collisions and mergers), comparing what they see to their computational predictions.

So, eventually, these seven groups of dwarf galaxies may get together to form bigger galaxies, perhaps even something as spectacular as the Milky Way! But that will likely take hundreds of millions of years… Instead of waiting for that to happen, astronomers can continue the search for more dwarf galaxies, searching for more examples of galaxies in the process of formation.