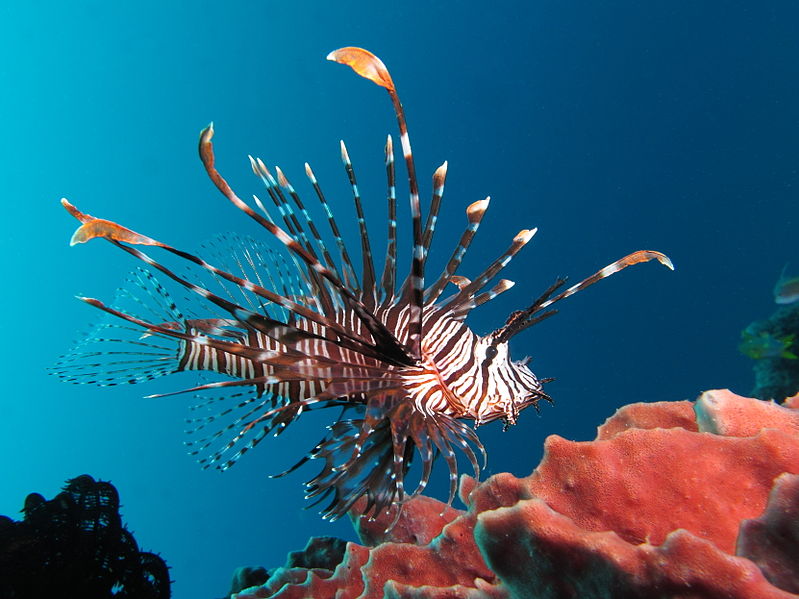 Earlier this year, we produced a video documenting Academy researcher Luiz Rocha’s work in Belize studying invasive lionfish. These predators, originally from the Indo-Pacific, found their way to the northwest Atlantic in the 1990s—likely through an aquarium release—and have steadily moved south over the past fifteen years.

The lionfish are wreaking havoc in the area because they voraciously gobble up smaller, native fish—threatening everything from coral reef ecosystems to local economies based on fishing and tourism. In addition, eradication appears impossible and whatever is keeping them in check in their native Indo-Pacific habitats—researchers around the world are trying to find out what—appears to missing in the Atlantic.

“Prey in the Indo-Pacific could simply be more aware of the danger lionfish pose,” Rocha says. “There could also be parasites keeping the lionfish in check in their native habitats.”

Bad
A recent study in PLoS One determines that humans may be the only threat to lionfish in their new home. An international research team looked at whether native reef predators such as sharks and groupers could help control the population growth of lionfish in the Caribbean, either by eating them or out-competing them for prey.

The team surveyed 71 reefs over three years, in three different regions of the Caribbean. Their results indicate there is no relationship between the density of lionfish and that of native predators, suggesting that, “interactions with native predators do not influence” the number of lionfish in those areas.

The researchers did find that lionfish populations were smaller in protected reefs, but researchers attributed the lower numbers to targeted removal by reef managers, rather than consumption by large fishes in the protected areas. As Rocha mentioned in the video last spring, encouraging the hunting and human consumption of these spiny fish may be reefs’ only hope.

Ugly
Recent submersible dives deep off the coast of Fort Lauderdale, Florida reveal that these invasive lionfish populations aren’t just spreading southward—they’re also heading to great depths, out of the reach of their only predators, human hunters.

“We expected some populations of lionfish at that depth [300 feet], but their numbers and size were a surprise," says Stephanie Green, of Oregon State University, who participated in the dives.

The lionfish are growing to an unusually large size—as much as 16 inches. “A lionfish will eat almost any fish smaller than it is,” Green says. “Regarding the large fish we observed in the submersible dives, a real concern is that they could migrate to shallower depths as well and eat many of the fish there. And the control measures we’re using at shallower depths—catch them and let people eat them—are not as practical at great depth.”

Rocha confirms this. “Even if control efforts are successful in shallow water, we can’t reach these deep fish.” And the lionfish at great depths can easily move to shallower areas. In addition, “these larger fish produce more eggs,” Rocha says, creating even larger populations.

(Rocha is hoping to join on subsequent dives. He was invited on this recent submersible dive, but was attending a conference on Indo-Pacific fish in Japan at the time. A video of the dives is available here.)

Good
We want to end on an upbeat note, and Rocha has a recent study in Marine Ecology Progress Series about the spread of lionfish down the coast of South America and into Brazil. The fish haven’t reached that far yet, but given their rapid spread, it seems to be only a matter of time.

Working with other Brazilian researchers, Rocha investigated movements of various fish species across the Amazon-Orinoco plume (AOP), where the Amazon and Orinoco rivers meet the Atlantic Ocean. The study describes the AOP as “a large freshwater and sediment runoff between the Caribbean and the Brazilian Provinces that represents a ‘porous’ barrier to dispersal for reef organisms.”

The scientists found that while a few “vagrant” species recently crossed the barrier heading north, “species headed south don’t spread as quickly,” according to Rocha. “The currents make it tricky to cross.”

This could be the first bit of good news in stopping the spread of lionfish. “This means we can keep an eye on it and control the lionfish as they cross, keeping their numbers down,” Rocha says.

Next
Rocha and colleagues here at the Academy and in Europe are beginning a population genomic study of the invasive lionfish. This study will look at fine-scale genetic diversity of lionfish among the different Caribbean islands. Rocha will start collecting samples in two weeks in Curaçao. The samples will then be analyzed by Academy researchers—including Rocha’s wife, Claudia—here at the Center for Comparative Genomics.

“We want to see if there is gene exchange between different island populations,” Rocha explains. “This will help us determine how successful local efforts to control lionfish can be if larvae are coming from other locations. This study can help inform how resources are used to control different populations.”

The fight against invasive lionfish continues…