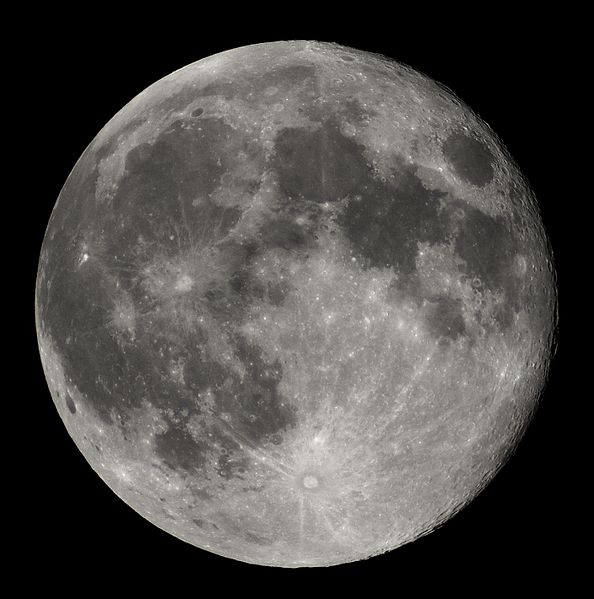 The Earth’s magnetic field is powered by heat from the inner core, which drives complex fluid motions in the molten iron of the outer core. But the Moon’s small size cannot support that type of magnetic field.

So imagine the surprise, forty years ago, when the Apollo astronauts brought back moon rocks with magnetic properties. How is that possible?

This week, two teams of scientists attempt to solve the mystery with separate papers in Nature.

Christina Dwyer, of UC Santa Cruz, and her team offer one theory. Early in its history, the Moon orbited Earth at a much closer distance than it does now, and it continues to gradually recede from Earth—even today! At close distances, tidal interactions between Earth and the Moon caused the Moon’s mantle to rotate slightly differently than the core. This differential motion of the mantle relative to the core stirred the liquid core, creating fluid motions that could give rise to a magnetic field.

Michael Le Bars, of Non-Equilibrium Phenomena Research Institute in Marseille, France, and his team have another theory. Large impact events like asteroids a few billion years ago could have caused sloshing within the lunar core for up to 10,000 years at a time.

So is it the asteroids’ fault or Earth’s? New Scientist doesn’t take sides:

Both models offer “a way out of a pretty major conundrum,” says Ben Weiss at the Massachusetts Institute of Technology.

Both theories produce a magnetic field of the right strength—about one fiftieth of what we experience here on Earth’s surface—but how do we decide which one is correct?  Sky & Telescope explains:

Distinguishing between these theories will depend in part on figuring out which rocks were magnetized when. Big bull’s-eyes happened pretty rarely in lunar history. If an impact created a dynamo, any molten surface rock around the time of the crash—such as lava created by the hit itself—would record the magnetic field created. But lava that erupted on the surface between these infrequent events wouldn’t. If most lunar rocks everywhere were magnetized during a particular time period, including rocks not made by impacts, that would sway the balance toward the precession argument, Weiss says. If impact melts are always associated with a magnetic field, the balance swings the other way.

Or maybe a combination of both? Wired makes the point that the two ideas aren’t mutually exclusive:

Dwyer herself has suggested that both models could have some parts correct, with tidal forces pushing the mantle steadily for a time and giant impacts speeding up the motion occasionally.