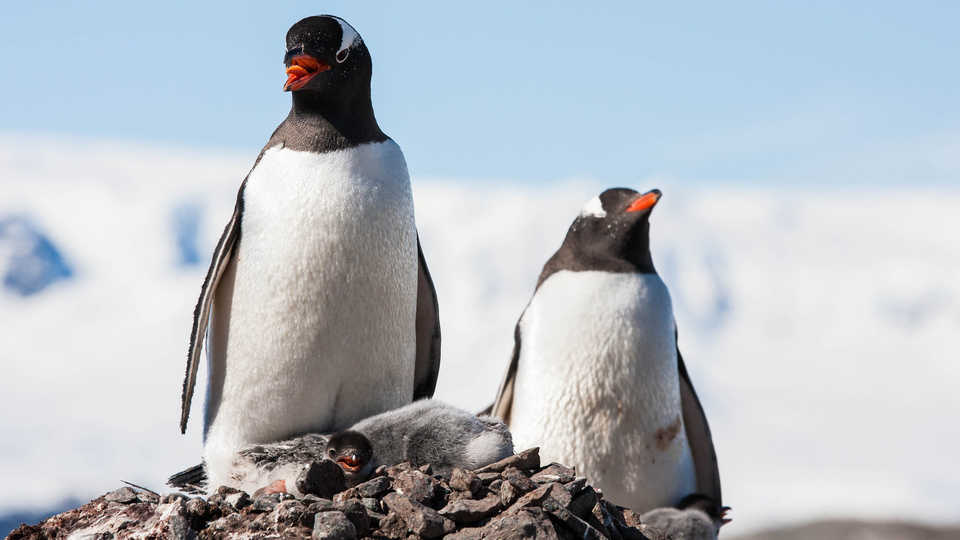 Happy Valentine’s Day from Science Today! As our gift to you, we present a smattering of stories that show the lengths to which our animal cousins will go for a little lovin’.

Mating rituals in the penguin world are not all that different than in the human world: A male gentoo penguin seeking a commitment spends some time searching for the perfect rock—in this case an actual stone, as smooth and flat as possible—as a gift to his potential mate. Females use stones to line their nests and the acceptance of one particularly perfect pebble, a 'love token,' marks the pair’s commitment to each other. For some males, pebble envy can lead to thievery and pilfering of other nests.

Sloths are mostly solitary animals, roaming the rainforests very slowly, upside-down and alone. But when it’s time for a get-together, female sloths are not shy about what they need. They scream for sex, as loud as they can, trying to get the attention of every male sloth in the tri-state area. Sloth hollers can be heard from a kilometer away, and are in D-sharp, says sloth researcher Lucy Cooke. After all the screaming comes the waiting, as the slow-moving males make their way to her spot in the trees.

The cuttlefish is a cunning little cephalopod. Researchers in Australia studied the mating habits of some male cuttlefish and caught them using their camouflage superpowers very creatively. A male cuttlefish, hanging out near a potential female mate, can alter half of its body patterns. It will keep its male markings on one side of its body, the side facing the female, but will change the other side of its body to look like it’s female. That way, when other male cuttlefish see the two of them together, they see only two females. That gives the cross-dresser more time to woo his love.

For the male hump-winged grig (an insect in the same family as grasshoppers and katydids) sex can get a bit bite-y. A female grig will sometimes chomp on a male’s hind wings while they’re mating, and drink its blood! Researchers say it’s almost never fatal for the males. Almost never.

Love is extremely complicated for a male coin spider. First, his female partner might just eat him if she’s hungry. Females are bigger than the males and apparently very cold-hearted. Then, if he survives the sex, a male coin spider will often turn right around and eat off his own genitals! (Haven’t they ever heard of a good old-fashioned cigarette?!?) Researchers call it “self-emasculation,” and Science News says more than one species of spider does it.

Dwarf spiders want to keep their lovers all to themselves, forever. During mating, a male dwarf spider deposits an extra-special liquid into his female partner. The liquid hardens and acts as a ‘plug’ inside the female that will block out any future rival sperm. The plugs seem to work, as researchers in Germany have found that very few future spider-mating attempts with “plugged” females were successful. This may be the (passive-aggressive) arachnid way of “putting a ring on it.”

That worm next door might be awfully cute, but if he’s from a different species, mating with him could be deadly. Scientists discovered something a bit shocking when they tried to get two species of nematode worm together. The sperm of a Caenorhabditis nigoni, when mating with a Caenorhabditis briggsae, did major damage very quickly. The sperm broke “out of the worm's uterus, destroyed the ovaries and then rampaged through the body, causing severe tissue damage.” Yikes!

So, if the natural world teaches us anything, this Valentine’s Day be careful, patient, a bit sneaky, and don’t forget to bring a gift!