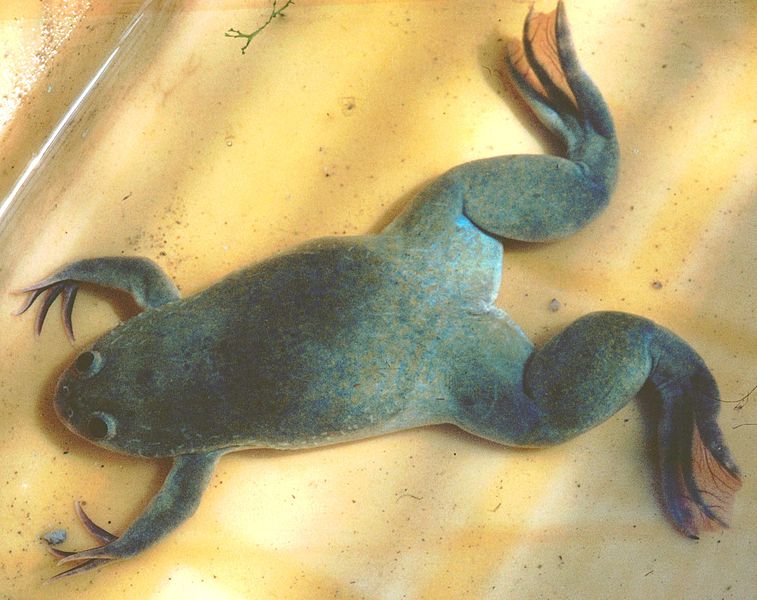 Batrachochytrium dendrobatidis (Bd) is the deadly chytrid fungus killing amphibians worldwide. Researchers have tracked the fungus to African clawed frogs (Xenopus laevis) in South Africa back to 1934, but how did it leave Africa—and those frogs—to cause the recent decline and extinction of 200 frog species worldwide?

Vance Vredenburg of San Francisco State University wants to know. In 2008, he witnessed a population of frogs he studied in Sequoia and Kings Canyon National Park drop 99.9% due to Bd.

Working with a team of researchers at Stanford, Vredenburg began looking at the herpetology collection here at the Academy. Our own Jens Vindum offered the team several specimens of African clawed frogs to swab for DNA samples. The scientists focused on specimens collected from wild populations in California between 2001 and 2010.

African clawed frogs were imported to the US between the 1930s and 1950s for use in pregnancy tests. The frogs ovulate when injected with a pregnant woman's urine.

“Today, these frog populations are often found in or near urban areas, probably because hospitals released them into the wild when new pregnancy testing methods were invented in the 1960s,” Vredenburg says. Since then, the frogs have established feral populations throughout North America, including Golden Gate Park.

Sure enough, the Academy’s California specimens of African clawed frogs carried Bd. “This is the first evidence of the disease among introduced feral populations in the US, and it suggests these frogs may be responsible for introducing a devastating, non-native disease to amphibians in the United States,” says Vredenburg.

And although the species is a known Bd carrier, these amphibians don’t succumb to the fungus. “It’s amazing that more than half a century after being brought to California, these frogs are still here, and they still carry this highly infectious disease,” remarks Vredenburg. “This implies that there must be a stable relationship between the pathogen and the frogs, whereas there are other frog species, for example in the Sierra Nevada, which have been wiped out by the pathogen.”

The team also tested archived Academy specimens collected in Africa between 1871 and 2010 and found evidence confirming that Bd was present among indigenous populations of this species before they were exported worldwide.

Although no longer used in pregnancy testing, African clawed frogs are still imported to the US for use in biomedical and basic science research. Because of their suspected role as a carrier of the Bd fungus and other potential pathogens, eleven states have already restricted the importation of these frogs, by requiring special permits and not allowing them to be sold as pets.

The study was published last week in PLoS One.