Rich Mooi studies the origin and evolution of echinoderms—a group that includes sea urchins and starfish—and has spent decades charting the relationships between these highly diverse organisms.

The Art of Science 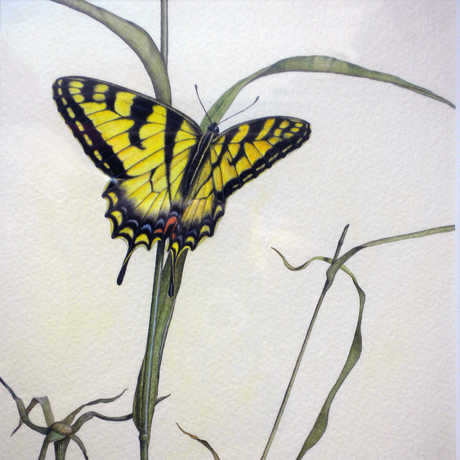 Although careful, meticulous observation is often underrated, Rich Mooi has built a career on his attention to detail. For more than 30 years, Mooi has been steadily filling in and building onto the phylogenetic tree of echinoderms, the enigmatic and rarely studied group of invertebrates that includes sea urchins, starfish, brittle stars, sand dollars, sea lilies, and sea cucumbers. The process of identifying important connections among various species of a phylum with a massive fossil record requires just this sort of painstaking observation, and Mooi is an expert at noticing similarities (and differences) down to the cellular level.

Mooi’s initial love of nature came from his parents, particularly his father, who had a lifelong interest in natural history. “They encouraged me to observe. My brother and I did a lot of nature walks with them and we’d walk trails and just notice stuff,” Mooi says. Like many kids of his generation, he was obsessed with the books and films of marine scientists like Rachel Carson and Jacques Cousteau. He remembers spending much of his time drawing: “I would sit down in a field of trilliums with a pile of paper and just draw them until I fell over,” he says. When he was 8, he created detailed “blueprints” for the research vessel he planned to use when he grew up and became a marine biologist. He pursued his interest in both art and science, producing lots of wildlife art, until it was time to decide what to study in college. He chose science, with the idea that it’d be easier to be a practicing scientist with art on the side than the other way around.

But he hasn’t really relegated art to the sidelines. “The intersection between art and science continues to be a very strong theme in my life,” says Mooi. Back when he was teaching invertebrate zoology, he made his students draw specimens with the belief that the active practice of reproducing features on paper would help them notice more than if they simply looked. Illustrations pop up in his work frequently, gracing the pages of scientific papers and educational videos, or as part of his work overseeing the Academy’s Biological Illustration Internship. The scientific illustrations that Mooi creates to accompany his research provide clarity for concepts difficult to understand even outside the context of a scientific paper. “Because you can edit out the extraneous ambiguous features, a simple drawing produces a more powerful message,” says Mooi. “A picture truly is worth a thousand words, and I think that’s a serious underestimate.” 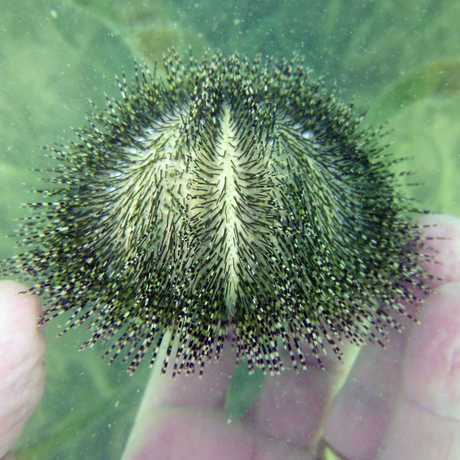 If you ask Mooi to tell you about what he does, he has the perfect line: “My elevator speech is, ‘I’m interested in the origin of evolutionary novelty.’” If you have more time to hear about evolution’s innovations, Mooi will tell you that the most novel of all organisms he’s stumbled upon are those within the phylum Echinodermata.

He’s biased, of course. Ever since he was introduced to echinoderms during a college course, he’s been fascinated by the origins of a group so unique, he says, that “not even Spielberg could have come up with weirder alien-like things. They're like the mutated leftovers from an ancient alien picnic.” Some have hundreds or thousands of tube feet, for respiration and locomotion, and some have arms—that’d be the “stars” of the group. Some have no limbs at all; the sea cucumbers look like big fat worms and the sea lilies look like plants attached to the seafloor.

Echinoderms are among the oldest creatures on Earth, with a fossil record that goes back to the Cambrian period, about 550 million years ago. They can be found just about everywhere, even Antarctica—in fact, they’re surprisingly abundant in some of the world’s coldest oceans. Mooi, along with longtime research partner Bruno David, has been tracing the evolutionary steps that led to present-day echinoderms and is working on determining the hallmarks of what makes an echinoderm an echinoderm. “We now have this system that is a complete set of comparative bases for all of the different groups of the echinoderms,” Mooi says. “That’s led us to this really amazing view of how these organisms came to look the way they do.”

The Value of Sand Dollars 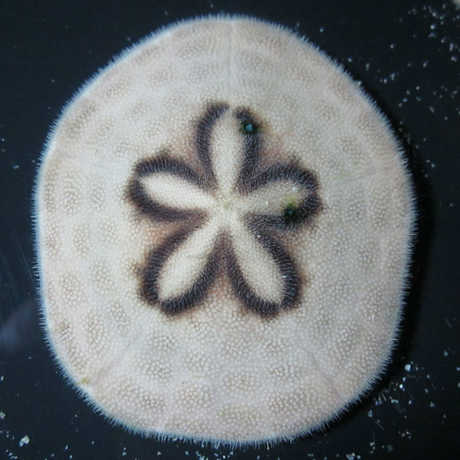 Put a sand dollar, any sand dollar, in front of Mooi and he can tell you exactly how old it is, where it’s from, and when and where that species developed the identifying holes in its internal skeleton. He can also easily tell you how it evolved to become one of the “advanced” sea urchins that, in an evolutionary coup, developed bilateral symmetry (symmetry along a central axis, like humans) in addition to the echinoderm-defining 5-part radial symmetry.

This is possible because sand dollars have an extraordinary fossil record, thanks to their hardy skeletons, or tests. That fossil record acts as a vast reference library of sand dollar evolution, an incredible aid in figuring “how you get something so radically different from a sea urchin.”

Sand dollars are extremely successful, perhaps because they’re so “extremely weird” (Mooi’s description). “They've done something really amazing and different. They’re a pile of novelties, and they’ve gone way off the deep end in modifying their morphology to adapt to where they live,” says Mooi. Sand dollars are the only echinoderms that live on beaches because they’ve developed features that allow them to do so, including tiny tube feet to manipulate individual grains of sand. They’re also much flatter than other sea urchins and have developed "spoiler" holes for letting water pass over and through them without lifting them up and away in the current. 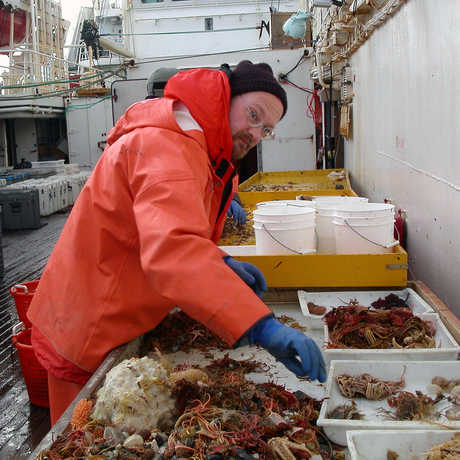 According to Mooi, it’s nearly impossible to take a photo of the Antarctic seafloor without an echinoderm in the frame: “It’s an echinoderm heaven down there!” It’s also a sort of heaven for somebody looking to study some of the oldest echinoderm groups still living, as well as sea urchins with very peculiar reproductive behavior, Mooi’s main reason for traveling to Antarctica.

What he discovered there was an extreme version of brooding, in which sea urchins essentially “give birth” to spiky juveniles. Most sea urchins release sperm and eggs into the water where they are fertilized, but 60 out of the 65 species of sea urchins in Antarctica brood their young.

Among those 60 species, Mooi discovered an extreme type of brooder that stores its developing young in an internal pouch, where they grow to be about 10 percent the size of the mother. To create enough room to let the juveniles out (they already have fully formed spikes), a formation of plates around the opening of the pouch folds downward. These plates are connected with a tissue that softens and allows the plates to move, an evolutionary strategy that’s more familiar to biologists who study mammals, including humans. “That connective tissue between those plates is similar to the connective tissue in the pelvic girdles of women,” says Mooi. “Under hormonal control, the tissues connecting the bones in the pelvic girdle soften during pregnancy so that the hip bones can move apart. These sea urchins do the same thing.” 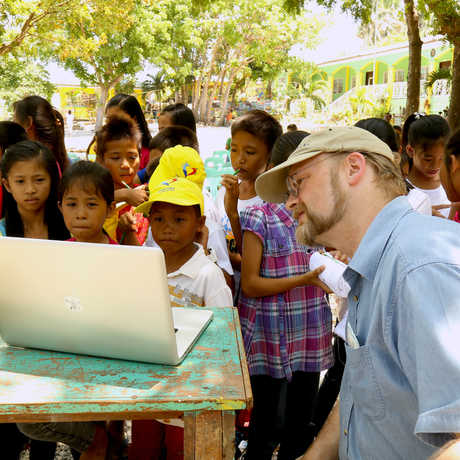 In 2014, Mooi embarked on an ambitious project a little closer to home. He joined an Academy effort to produce an extensive digital learning course on the not-so-small topic of biodiversity. The course, simply titled “Biodiversity,” is available for free via iTunes U and Khan Academy and has garnered over one million views since its launch. It covers topics as diverse as ocean acidification, invasive species, and gene flow, and for all of these topics, Mooi acts as scientist, illustrator, and narrator. Using Mooi’s finely honed drawing skills and clever animation techniques, the course helps make the important topic of biodiversity accessible to the general public.

This sort of scientific outreach—bringing science to a wider and more diverse audience—is near and dear to Mooi. He's been involved in running the Summer Systematics Institute for 20 years, inviting high school students to work on research projects with Academy scientists for a summer crash course in natural history museum-based work.

The biodiversity course is easily accessible online, but the outreach doesn’t stop there. During a 2015 expedition to the Philippines, a place where the Academy is invested in research and collaborating with the local community, Academy staff brought USB drives loaded with the course translated into the local language of Tagalog. They shared the course with colleagues in Manila, who brought it to classrooms and peers in the outer provinces of the Philippines. “Our colleagues are so overwhelmed by the challenges of their day-to-day work that they don’t have time to think about the bigger picture,” Mooi says.

When coming up with the curriculum for the online course there was never any question as to whether or not biodiversity would be the topic. “Biodiversity study and preservation are in our wheelhouse. They're what we can do, and what we should do,” says Mooi. “The common thread running through the videos is an attempt to inject the idea that all this biodiversity is not going to be here forever if we don’t do something now.” 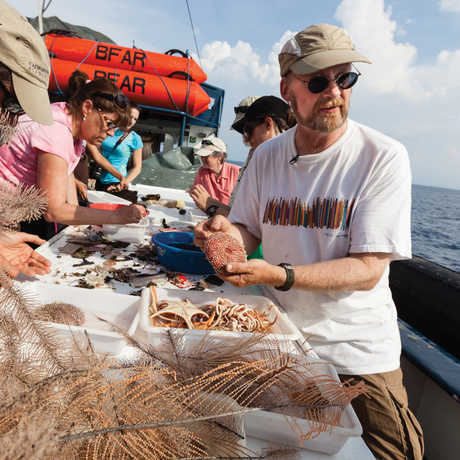 Videos:
The Philippines
Sand Dollars and Their Holes
The Importance of Science Communication

Invertebrate Zoology & Geology at the Academy