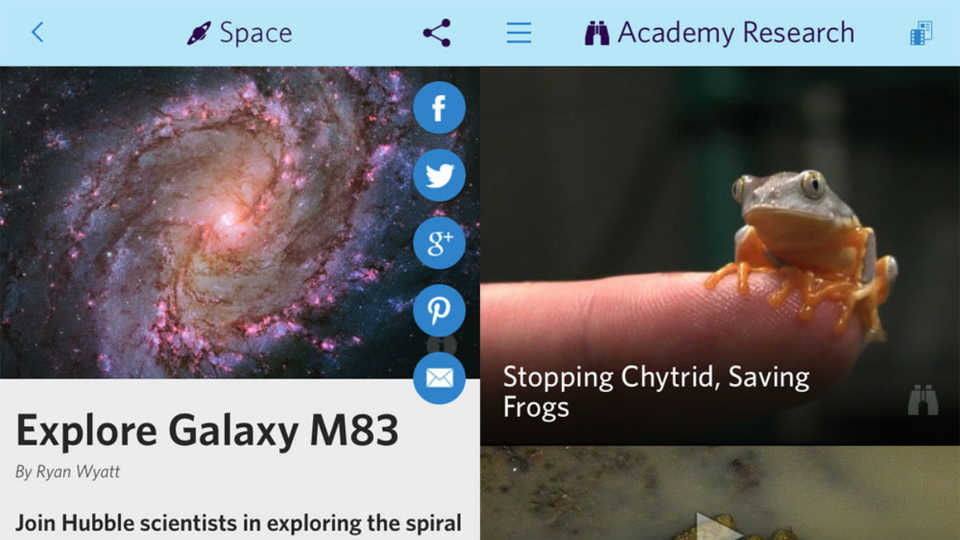 SAN FRANCISCO (March 3, 2014) — The California Academy of Sciences in San Francisco has released Science Today, a new mobile app for both iOS and Android platforms. This free app allows content consumers and science enthusiasts to explore the latest news in the world of science with engaging videos, striking images, and concise, original stories. Science Today allows users to share and post content directly from the app to their social media accounts, making it simple to find, share, and read news. In just one month since its release, the app has been downloaded by over 78,000 users.

"As a public museum and world-class research institution, we are thrilled to bring original, engaging content to science news consumers around the world," says Dr. Elizabeth Babcock, the Academy's Chief Public Engagement Officer and Roberts Dean of Education. "With the new Science Today mobile app, we hope to inspire users to dive deeper and actively explore the wonders of the natural world."

Designed with a clean, easy-to-navigate interface, the app brings science news to the fingertips of users around the world. With six featured content categories, including Earth, Life, Space, Sustainability, and Technology, users can filter and browse content specific to their interests. Science Today also features a dedicated category for stories on Academy scientists and their research, a team of 60 research scientists and biologists, 100 international Research and Field Associates, and 300 distinguished Fellows conducting research around the globe to document and sustain the biodiversity of the natural world.

As the mobile home of the Academy's online Science Today platform, the content is produced by an in-house team of writers, producers, and videographers. The Academy, located in San Francisco's Golden Gate Park, is home to an aquarium, planetarium, natural history museum, and four-story rainforest. Science Today was developed in partnership with Cainkade, a New York-based software design and development studio.

Science Today is the fourth mobile app released by the Academy. It joins a suite of science-focused apps including Pocket Penguins, Academy Insider, and Golden Gate Park Field Guide. To learn more about the app, click here.

The California Academy of Sciences is a leading scientific and cultural institution based in San Francisco. It is home to an aquarium, planetarium, natural history museum, and research and education programs, which engage people of all ages and backgrounds on two of the most important topics of our time: life and its sustainability. Founded in 1853, the Academy's mission is to explore, explain, and sustain life. Visit www.calacademy.org for more information.