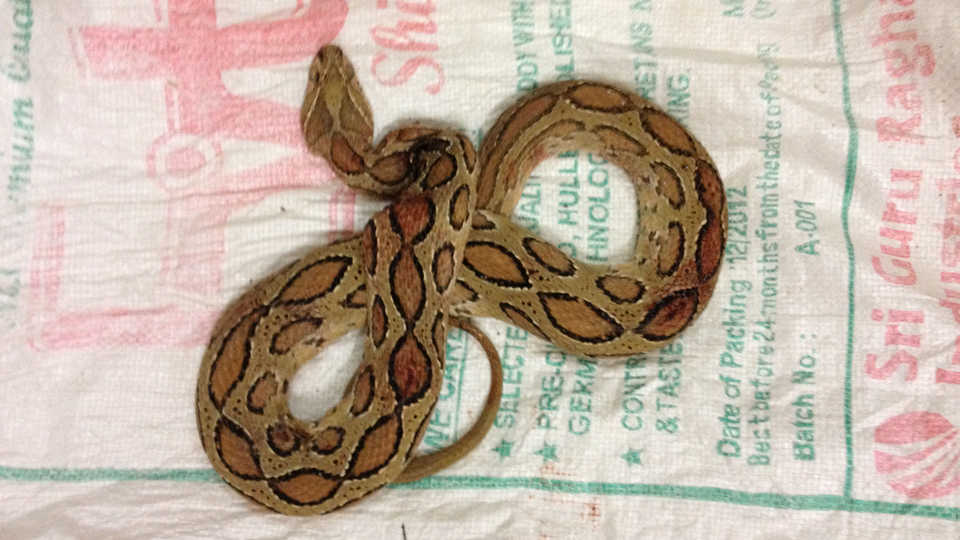 SAN FRANCISCO (May 28, 2014)—A team of researchers, led by Dr. Matthew Lewin of the California Academy of Sciences and Dr. Stephen P. Samuel of Trinity College Dublin, Ireland has taken another promising step toward developing a universal antidote for snakebite. Last summer, the team tested the effectiveness of a nasally administered antiparalytic drug on mice injected with high doses of Indian cobra (Naja naja) venom. Mice injected with otherwise fatal doses of venom outlived and in many cases survived after being treated with the antiparalytic agent, neostigmine. These findings support the team's idea that providing fast, accessible, and easy-to-administer treatment can increase survival rates in victims of venomous snakebite. The results of this pilot study were recently published in the Journal of Tropical Medicine.

During the course of the experiment, separate groups of mice were given varying doses of venom (all above lethal limits) and then treated with the antiparalytic treatment at two different time intervals: within 1-2 minutes after envenomation and 10 minutes after envenomation. 10 of 15 mice given the lowest dose of venom, followed by the treatment within 10 minutes, survived and later exhibited completely normal behavior, while 100 percent of control mice died. In groups given higher doses of cobra venom (2 to 5 times the lethal dose) all mice succumbed, but those treated with a single dose of neostigmine survived significantly longer than the controls. Although the mice in this experiment were each treated only once to maintain a consistent protocol, a nasally administered antidote could, in practice, be administered multiple times without needles. Inhibitors of other types of venom could be combined with those working against paralysis to form a complete antidote. With many combinations for potential testing, the team is now working intensively with chemist and snake venom expert, Dr. Sakthivel Vaiyapuri of Reading University in the United Kingdom, a co-author on the report.

"Antivenom is necessary, but not sufficient to manage this problem. Its limitations are fairly well known at this point and we need a better bridge to survival. It's ironic that virtually every medical organization and practitioner wears the snake symbol, yet we have no real effective treatments for the people getting bitten," says Dr. Lewin, Director of the Center for Exploration and Travel Health at the Academy. "Ninety-eight percent of snakebite victims live in poverty, which is perhaps why funding and innovation are lacking. The bottom line is that no one should die from a snake bite in the twenty-first century, and we?re optimistic about this promising step."

The team initially demonstrated the potential of this novel snakebite treatment during an experiment conducted in April of 2013 at the University of California, San Francisco. In that experiment, a healthy human volunteer was paralyzed, while awake, using a toxin that mimics the effects of the venom of cobras and other snakes that disable their victims by paralysis. The experimental paralysis progressed from eye muscle weakness to respiratory distress in the same order typically seen in snakebite victims. The team then administered the nasal spray and within 20 minutes the patient had recovered. The results of this experiment were published in the medical journal Clinical Case Reports.

In late June of 2013, Samuel, Dr. C. Soundara Raj, and colleagues at TCR Multispeciality Hospital in Krishnagiri, Tamil Nadu, India accelerated the recovery of a snakebite victim on life support using this method. After receiving 30 vials of antivenom, the standard treatment for venomous snakebites, the female patient remained weak and suffered from facial paralysis. Within 30 minutes of treatment with the antiparalytic nasal spray, the patient?s facial paralysis was reversed. Two weeks after being treated, the patient reported having returned to her daily activities.

As the head of the Academy's Center for Exploration and Travel Health, Lewin prepares field medicine kits for the museum?s scientific expeditions around the world and often accompanies scientists as the expedition doctor. In 2011, Lewin assembled snakebite treatment kits for the Academy's Hearst Philippine Biodiversity Expedition, which would have required scientists to inject themselves if they were bitten. Lewin began to wonder if there might be an easier way to treat snakebite in the field and began to explore the idea of a quick and easy-to-administer nasal spray.

Snakebite is one of the most neglected of all tropical diseases, with nearly 5 million people bitten by snakes each year. The number of fatalities globally is up to 30 times that of land mines and comparable to AIDS in some developing countries. In India alone, snakes kill approximately a third as many people as AIDS and severely injure many more. It has been estimated that more than 75 percent of snakebite victims who die do so before they ever reach the hospital, predominantly because there is no easy way to treat them in the field. Lewin's new approach may dramatically reduce the number of global snakebite fatalities, currently estimated to be as high as 94,000 per year.

The Institute for Biodiversity Science and Sustainability at the California Academy of Sciences is at the forefront of efforts to understand two of the most important topics of our time: the nature and future of life on Earth. Based in San Francisco, the institute is home to more than 60 research scientists and aquarium biologists, as well as 45.6 million scientific specimens from around the world—nearly 40,000 of which are alive and on display in the Academy's Steinhart Aquarium. The institute also leverages the expertise and efforts of more than 100 international Research and Field Associates and 300 distinguished Fellows. Through expeditions around the globe, captive breeding programs, and investigations in the lab, the institute's scientists strive to understand the evolution and interconnectedness of life. Through these same efforts, as well as through partnerships, community outreach, and public engagement initiatives, the institute aims to guide critical conservation decisions and address the challenge of sustainability.