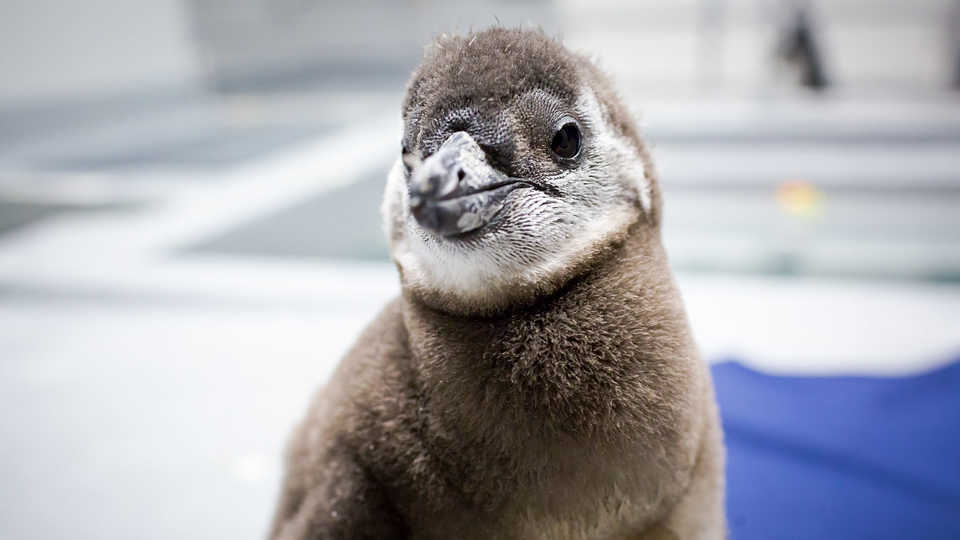 San Francisco (January 24, 2019)—Earlier today, biologists at the California Academy of Sciences introduced a new juvenile penguin chick to the popular African penguin habitat. Stanlee, a female penguin chick, hatched in November and was named by Academy biologists after renowned comic book creator Stan Lee, who passed away the same week. Fans of the Academy’s African penguin colony can keep an eye out for Stanlee (sporting a teal band on her left wing) during the museum’s annual Penguin Valentines program, happening daily from February 12-14 during morning and afternoon feedings at 10:30 am and 3 pm.

Stanlee has spent the past few months behind the scenes in the aquarium attending “fish school,” where all new penguin chicks learn to swim on their own and eat fish from a biologist, important life skills she’ll need when joining 15 fellow birds in the Academy’s bustling colony. Each day at fish school also includes daily enrichment sessions with aquarium biologists to help keep the birds stimulated and engaged in their new environment. Since African penguins are an extremely social species, elder juvenile bird Rufaro joined Stanlee during her time behind the scenes to help get her comfortable socializing with other birds.

The Academy has a long and successful history of breeding African penguins as part of a Species Survival Plan (SSP), a collaborative breeding and transfer program among partner institutions accredited by the Association of Zoos and Aquariums (AZA) dedicated to maintaining genetic diversity in the resident population of African penguins. African penguins were classified as an endangered species in 2010 and are at high risk of extinction in the wild, so breeding programs like this are critical to the sustainability of this species.

In addition to working to sustain the resident population of African penguins within zoos and aquariums, Academy biologists also further this critical sustainability work in the field. In December, Academy biologists Piper Dwight and Holly Rosenblum traveled to South Africa to hand-rear chicks that could no longer be fed by their parents and introduced these penguins back into the wild as part of the Academy’s partnership with SANCCOB, a leading conservation organization.

Keep up with the Academy’s African penguin colony via the live HD Penguin Cam, where feedings are broadcast twice daily at 10:30 am and 3 pm (PST). The Penguin Cam is available online or by downloading the Pocket Penguins mobile app.