New exhibit explores the science and nature of skin–from how it protects, heals, and attracts in the animal kingdom to how it shapes human culture and identity 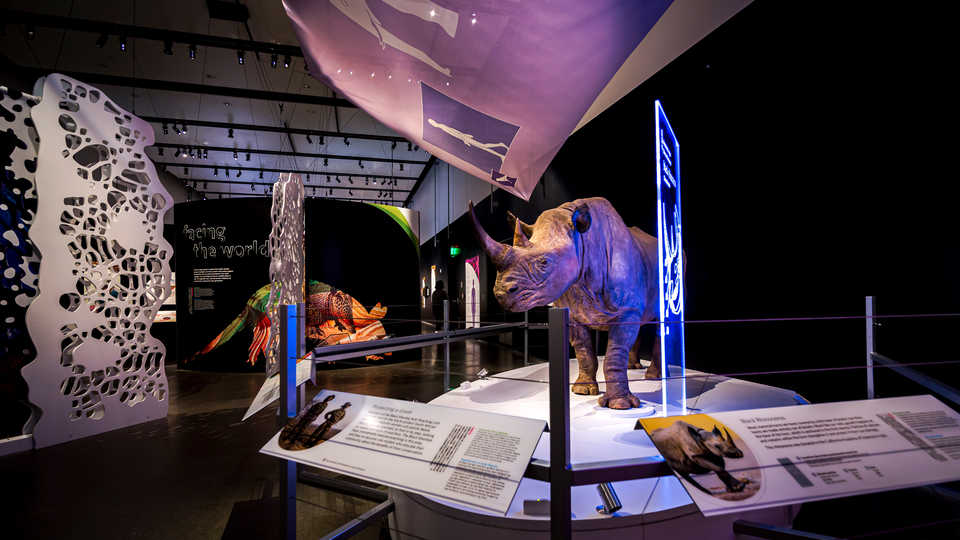 SAN FRANCISCO (June 3, 2019) – Uniquely personal yet universal, skin is the way we face our world. In the California Academy of Sciences’ latest exhibit, Skin: Living Armor, Evolving Identity, visitors are invited to dive deep into the shape-shifting, color-changing, and ever-evolving science of skin. This multisensory, multilingual exhibit, which opens to the public on Friday, June 14, explores skin as both a complex organ that serves as a living interface between organisms and their environment and a culturally significant characteristic that shapes how humans view themselves, perceive others, and interact with one another in a modern world. The Skin exhibit will be presented in English, Spanish, Chinese, and Filipino.

“When we set out to develop an exhibit about skin, we knew we had an exciting opportunity to leverage both the Academy’s rich scientific expertise in biodiversity, human societies, and the evolution of the natural world, as well as the critical viewpoints and perspectives of community partners working to address racism and inequity through educational outreach and social justice initiatives,” says Dr. Elizabeth Babcock, the Academy’s Chief Public Engagement Officer and Roberts-Wilson Dean of Education. “At a time when celebrating diversity and identity, both within our communities and as a global society, is more important than ever, we hope visitors will take away new perspectives about the role of skin in our ever-changing world.”

The exhibit, developed in-house at the Academy and several years in the making, features dozens of scientific specimens from the Academy’s world-class research collections that showcase the incredibly adaptive properties of skin—including its remarkable ability to support and regenerate a variety of keratin-based structures like armored reptile scales, aerodynamic bird feathers, and insulating mammal fur.

Upon entering the exhibit space, visitors will be awed by a massive black rhinoceros (Diceros bicornis), a research specimen that was donated to the Academy in 1952. Unlike most mammal horns made of bone covered by a thin layer of protein-rich keratin, sturdy rhino horns are made entirely of keratin, anchored to the animal’s thick epidermis. Critically threatened in the wild due to habitat loss and demand for their highly prized horns, Academy scientists hope to deepen visitors’ understanding of some of today’s most pressing conservation issues, like illegal poaching and trade, by displaying important specimens rarely seen on public view.

“Rhinos are an incredible example of the ways in which skin adaptations allow species to survive in the harshest environments. It’s nearly impossible to not be awe-struck by the presence of a black rhino, with its tough, weathered skin, incredible horns, and sturdy hooves,” says Dr. Jack Dumbacher, the Academy’s curator of birds and mammals. “Tragically, rhinos are facing a conservation crisis in the wild, falling victim to illegal poaching faster than this species can rebound. By displaying this research specimen as part of the Skin exhibit, we hope visitors will take a moment to reflect on the magnificence of this animal and learn more about conservation initiatives currently in place to protect this species from extinction.”

From armadillos, porcupines, pangolins, and turtles that depend on thick skin, sharp quills, and hard shells for protection and survival, to the most delicate insects, birds, and invertebrates that breathe, communicate, attract, and repel with their highly-tuned skin receptors, Skin gives visitors a chance to see beyond the surface of these dynamic creatures.

Throughout the exhibit, hands-on multimedia experiences bring to life how animals heal and regenerate skin in extraordinary ways. Interactive, fully accessible displays designed for all ages invite visitors to stimulate their own skin’s array of senses to uncover how we perceive the sensations of temperature, vibration, and pressure. Visitors can also discover the surprising ways that skin functions as an ecosystem unto itself. From parasitic whale barnacles teeming with life to microscopic human face mites (spoiler: we all have them!), Skin offers a new lens through which to learn about evolution and diversity while examining these seemingly invisible worlds closer than ever before.

While the exhibit is rich in eye-catching specimens and interactive displays, even more importantly, Skin aims to spark thought, reflection, and dialogue around the social, political, and cultural implications of race and identity. Within the exhibit, visitors can learn more about the inspiring, community-based work that businesses and organizations like Asian Pacific Environmental Network, Brown Girl Surf, Cycles of Change, La Cocina, Tenderloin Neighborhood Development Corporation, Outdoor Afro, Youth Outside, and many others are doing in the Bay Area and beyond to further social and economic equity. Academy staff also partnered with the organization Facing History and Ourselves on a series of interactive trainings and discussion sessions to explore the often challenging topics of racism and prejudice and how to most effectively foster thoughtful dialogue between visitors, staff, and the community as part of the exhibit’s public programming.

“Learning about race and racism is like learning a new language,” says Brian Fong, School Liaison and Program Associate with Facing History and Ourselves. “We are learning the structure and vocabulary so we can communicate clearly to each other. It is critical that we spend more time in dialogue with one another to identify and examine how ideas about race have affected our understanding of the world around us.”

As visitors make their way through the exhibit, a large digital mural will display a “sepia rainbow” of human faces, telling a striking visual story of skin’s incredible diversity. An interactive map invites visitors to trace the evolutionary role of melanin to learn how UV rays and vitamin D affect skin appearance in different regions and climates.

“When we study human skin color from a global perspective, we are struck immediately by the fact that skin color is related to the intensity of sunlight. This fact alone is important because it shows that people have been subjected to the same evolutionary forces as other animals and that they have responded similarly. We are part of the natural world!” says Dr. Nina Jablonski, Academy Fellow and Evan Pugh University Professor of Anthropology at Pennsylvania State University, whose research is highlighted within this new exhibit. “Knowing that skin color can be explained by straightforward concepts, like the intensity of sunlight and the history of human migrations and population interactions is important. It means that human physical diversity can be understood in the same ways as we understand the diversity of other organisms on Earth.”

Skin dives deeper to explore the layers of meaning humans have associated with skin color throughout history and how our ever-evolving social and political climate has influenced shifting ideas of race and culture in our modern world. Visitors can also learn how evolution has shaped diversity in human skin over generations—and how much we still have yet to uncover about the underlying genetics of skin color.

The Academy will also offer a suite of new daily public programs that further explore the science of skin, including a children’s puppet show about animal fur and scales, interactive theater program examining the microbiome on your face, and more. Plus, adults 21+ can enjoy this new exhibit after dark during Skin NightLife from 6-10 pm on Thursday, June 20.

The California Academy of Sciences is a renowned scientific and educational institution dedicated to exploring, explaining, and sustaining life. Based in San Francisco’s Golden Gate Park, it is home to a world-class aquarium, planetarium, and natural history museum, as well as innovative programs in scientific research and education—all under one living roof. Hours are 9:30 am - 5:00 pm Monday - Saturday, and 11:00 am - 5:00 pm on Sunday. Admission includes all exhibits, programs, and shows. For daily ticket prices, please visit www.calacademy.org or call (415) 379-8000 for more information.