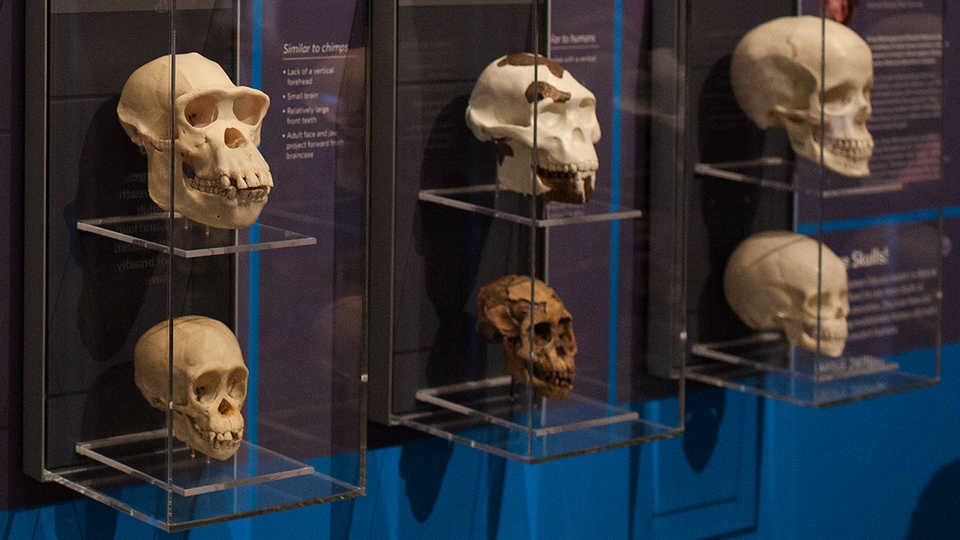 SAN FRANCISCO (February 26, 2014)—Before your eyes, thousands of tiny flesh-eating beetle larvae wipe a skull clean, feasting on the meat of a dead animal's head. An Academy anthropologist points to the eye sockets of an ancient skull and through them gazes 3.3 million years into the past. Two deer skulls seem to be staring at one another, antlers still locked in their final deadly battle. And video projections of swimming sea lions add life to a wall of more than 400 sea lion skulls arranged in an artistic 90-foot-long display. Some may find the idea macabre, but over one million wide-eyed visitors are about to have their minds expanded looking at skulls in a whole new light.

On May 16, 2014, the California Academy of Sciences will open the doors to Skulls, a new exhibit featuring 640 different dead heads. Skulls on display will range from an enormous African bull elephant to a tiny shrew, from frogs, fish, and birds to giraffes, warthogs, and walruses.

"A skull provides important information about a species' evolution—and it also reveals secrets about that individual animal's life," says Moe Flannery, Collections Manager of Ornithology & Mammalogy at the Academy. "By searching for clues written into the bone, we can follow the story of an animal's life, from birth to old age. We can learn what the animal ate, how it defended itself, communicated, interacted with its environment, and often how it died— all by looking at its skull."

Located in the Academy's second floor Forum Theater and Gallery, the nearly 4,000-square-foot Skulls exhibit will run through November 30, 2014, allowing visitors to join the scientific quest to understand how vertebrate animals live, die, and— ultimately— evolve by studying their skulls.

"When people see a skull, their first thought is often about death," says Scott Moran, Director of Exhibits at the Academy. "But the skulls in this exhibit really tell a story about life. They help us understand the living world. Here at the Academy, we house an amazing collection of more than 28 million scientific specimens from around the world, and this exhibit allows us to put hundreds of them on display, giving visitors the opportunity to investigate, discover, and wonder at some of our most fascinating biological treasures."

An Elephantine Entrance
Upon entering the exhibit, guests will come face to face with a massive African bull elephant skull. This huge skull belonged to a member of the largest living species of land mammal, yet honeycomb-like spaces in the bones of its forehead make it relatively lightweight, a feature that allowed the animal to hold its enormous head up more easily. Elephants have evolved many unique physiological features that we can learn about by studying their skulls. Through this impressive example, as well as displays of other skulls from a variety of fish, amphibians, reptiles, birds, and mammals, visitors learn how scientists study the size, shape, position, and structures of skulls to solve mysteries about an animal's life.

To encourage visitors to look more closely at these skulls, a few imposters—including a walrus, wolf, and warthog—are sprinkled among this sea of sea lions. At the "Where's Walrus?" station, animal sounds provide clues to help visitors find the skulls that don't belong. Touchable sea lion skulls are also positioned low enough for guests of all ages to feel and examine at eye-level.

A short video within this section of the exhibit tells the story of Academy Field Associate Ray Bandar, who personally collected, cleaned and prepared most the skulls on display. A retired high school biology teacher, Bandar collected his first skull in 1953 and has been at it ever since, under the permit of the California Academy of Sciences. Over the past 60 years, he has collected more than 7,000 skulls, including most of the Academy's collection of about 2,500 California sea lions. Bandar's amazing story and his contribution to the Academy's specimen collection take center stage in the new Skulls exhibit.

Flesh-Eating Beetles
Before a skull is accessioned into a scientific collection, the flesh must be cleaned off the bone. This can be done by burying the bone in the ground or soaking it in water—a slow process that can take weeks or even months. Scientists at the Academy also use dermestid beetle larvae to quickly (and safely) clean delicate bones. Guests will be able to watch these larvae in action as they diligently devour and clean the dried flesh from animal bones. When these carnivorous beetle larvae are most active—in a dark, warm environment with plenty to eat—they can scour the flesh from a small skull in just three days.

Hands-On Science
The Academy designed the new Skulls exhibit to be an interactive experience. Displays encourage guests to touch, feel, draw, play with, and explore the science of skulls. One interactive station allows guests to touch cast skulls of a human, a dolphin, and a horse. These skulls highlight the differences, but also the similarities, between vertebrate species. At another station, guests can learn about the evolutionary benefits behind a variety of unique skull shapes and adaptations. Interactive animations on the wall above illustrate the animal behaviors made possible by these bones.

Another popular interactive station—the Predator and Prey vision simulator—allows visitors to look through a viewer to see like a lion, and then flip a lever to see the same scene through the eyes of an antelope. This simulation reveals the trade-offs between excellent depth perception and excellent peripheral vision.

"So often museums are trapped in glass cases. The Academy is not like that at all," says Greg Farrington, the Executive Director of the California Academy of Sciences. "The Skulls exhibit is real. It's very hands-on. Guests of all ages get to literally explore skulls, to hold them in their hands. And they'll leave knowing a lot more about the natural world—as well as their own place in it."

The California Academy of Sciences is home to an aquarium, planetarium, natural history museum, and research and education programs, which engage people of all ages and backgrounds on two of the most important topics of our time: life and its sustainability. Hours are 9:30 am - 5 pm Monday - Saturday, and 11 am - 5 pm on Sunday. Visit www.calacademy.org or call (415) 379-8000 for admission prices and directions.